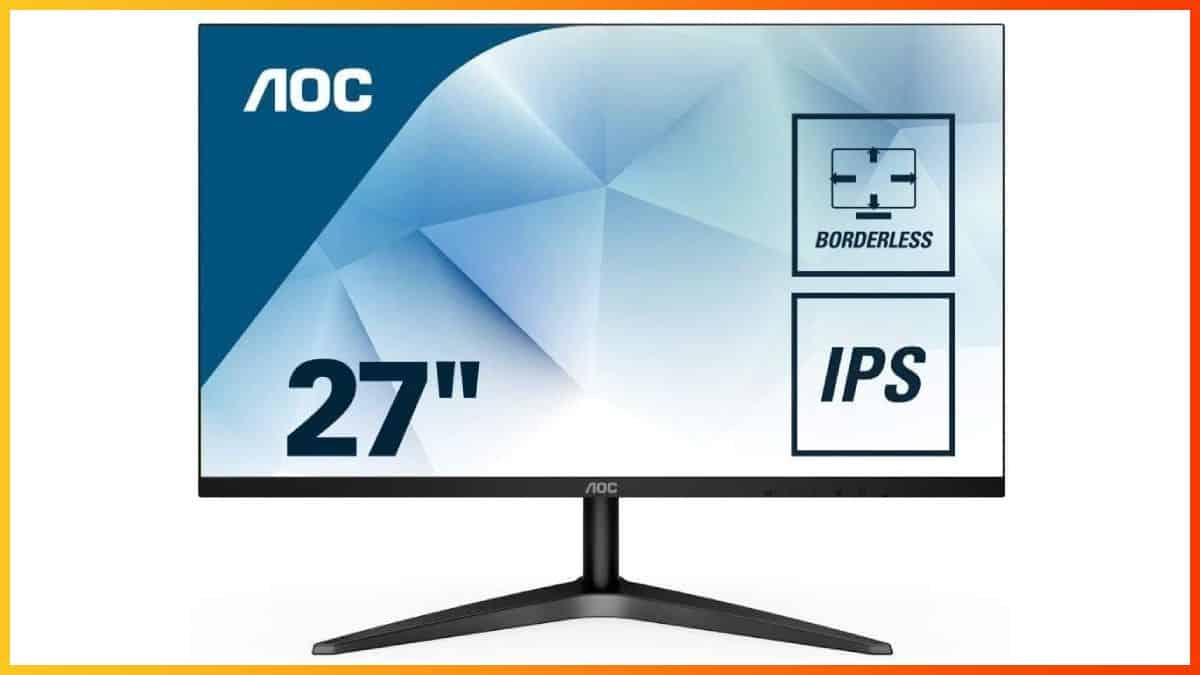 The AOC 27B1H may look like a great display for the price, but there are many things it lacks under its ultra-slim design, which is why we recommend you get one of the alternatives we’ve mentioned in the review instead.

The AOC 27B1H is a popular monitor due to its affordable price for an IPS panel display with an ultra-slim design. If you are interested in this monitor, there are a few things you should keep in mind though.

Although that’s a bit lower sRGB color space coverage than the preferable 99%-100%, the difference isn’t vital unless you plan on doing color-critical work.

The colors are vibrant and consistent, and they won’t change in tone when you look at the screen from different angles, thanks to the wide 178-degree viewing angles.

Other panel-related specifications include a 250-nit peak brightness and a static contrast ratio of 1,000:1, which is standard for a monitor at this price range.

For general multimedia entertainment and video games, the low pixel density is bearable, especially when you apply some anti-aliasing in games.

However, if you want a sharper image, go with the 24″ model of this monitor instead – the AOC 24B1H, which actually has a VA panel instead of IPS and, therefore, a higher contrast ratio as well.

When it comes to the performance, the AOC 27B1H monitor doesn’t have any issues, but it’s missing certain essential gaming features such as AMD FreeSync and Motion Blur Reduction that other similarly priced displays do offer.

Its input lag amounts to 12ms at 60Hz, which is enough to eliminate any delay between your actions and the result on the screen.

The response time speed of the AOC 27B1H is specified as 7ms (GtG) and 9ms (GtG) in different spaces (product webpage vs. product datasheet).

While the response time is slower than that of most IPS displays, which have 5ms (GtG), there’s really no prominent ghosting in fast-paced games. But then again, the monitor does have a refresh rate of only 60Hz.

The AOC 27B1H has a flicker-free backlight and an integrated low-blue light filter. These two features will make sure you don’t get headaches or eye strain even after prolonged usage of the screen.

Moving on, the AOC 27B1H IPS monitor has four OSD (On-Screen Display) hotkeys next to the power button. The hotkeys are used for navigation through the OSD menu, which can be a bit annoying as we’d prefer a 5-way joystick instead.

Besides the standard picture adjustment options such as contrast, brightness, sharpness, color temperature, gamma (three presets), audio volume (for headphones), and aspect ratio (16:9 and 4:3), there’s the Clear Vision feature which can improve the quality of low-resolution images.

Unfortunately, the monitor does not support AMD FreeSync, which would provide a variable refresh rate for compatible GPUs.

The biggest selling point of the AOC 27B1H is its ultra-slim design with 1.5mm thin bezels at the top and at the sides of the monitor.

Note that there’s also a 5mm black border around the screen. Further, you can only tilt the screen of the monitor by -4°/22° and it’s not VESA mount compatible.

Connectivity options are as scarce as the ergonomics as there’s only one HDMI 1.4 port, one VGA input, and a headphones jack.

The AOC 27B1H price amounts to ~$135. At this price range, we highly recommend you go with the ASUS VA24DQ instead.

The ASUS VA24DQ offers AMD FreeSync up to 75Hz, a higher pixel density, a wider color gamut, and a DisplayPort input (so you can use FreeSync with compatible NVIDIA cards as well).

You may also want to check out our best gaming monitor under $150 buyer’s guide.

While the AOC 27B1H does offer a nice image quality and an eye-catching design, there are simply better alternatives out there for that amount of money.