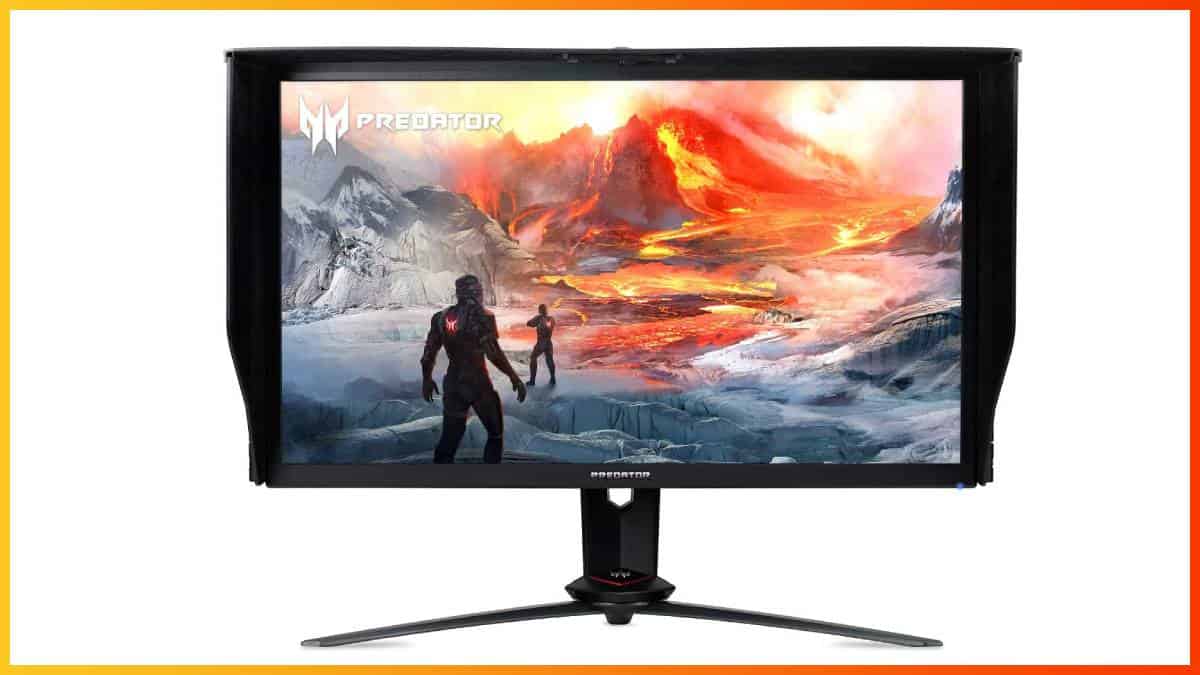 The Acer XB273K is a very good 4K 144Hz gaming monitor, however, there are some things you should keep in mind, such as its DisplayPort 1.4 limitations – which is something that’s been addressed by the newer 4K 144Hz monitors.

These two models are based on the same panel as the XB273KS, but instead of using a native G-SYNC module, they use Adaptive-Sync for variable refresh rate.

The Acer XB273K is based on an AHVA (IPS) panel by AU Optronics.

Thanks to the quantum-dot enhanced colors, decent peak brightness of 400-nits, and professional-grade factory calibration (Delta E < 1), the Acer XB273K monitor provides a notable enhancement over the standard picture quality; It has VESA’s entry-level DisplayHDR 400 certification.

4K UHD resolution ensures a crystal-clear image quality as well as plenty of screen space due to the rich pixel density of 163 PPI.

Although it’s quite demanding to drive, especially at higher frame rates, at least you won’t have to use anti-aliasing to eliminate the staircase effect caused by low resolution.

Our Acer XB273K unit had no excessive IPS glow and backlight bleeding nor any other defects such as dead/stuck pixels.

Its backlight is flicker-free, which, along with the integrated low-blue light filter, prevents headaches and eye strain caused by prolonged use of the screen.

The Acer XB273K input lag performance is excellent with only ~5ms of delay, which is imperceptible in real use.

Further, the response time speed of 4ms (GtG – gray to gray) effectively eliminates most trailing left behind fast-moving objects for a fluid and smooth gaming experience.

Now, in order to get 144Hz, you need to overclock the monitor from its native 120Hz refresh rate to 144Hz in the OSD (On-Screen Display) menu, which will limit the color output from Full Range RGB 4:4:4 to YCbCr 4:2:2 chroma subsampling.

This compression will make text and certain elements on desktop appear somewhat blurry, but it’s not noticeable in video games unless there’s a lot of text involved.

In contrast, the Adaptive-Sync models of this monitor have two DisplayPort inputs, which allow for 144Hz at 4K with no color compression. However, this also has its downsides; if you are using both ports, you can’t use VRR or HDR.

Additionally, you can use G-SYNC and HDR at the same time, while with the other models, you have to choose between VRR and HDR.

Besides G-SYNC, other gaming features include Aim Point – customizable crosshairs and Dark Boost, which increases the visibility of objects in dark areas in video games.

There are three fully customizable picture profiles, as well as a few pre-calibrated picture presets. You can also limit the color output to the sRGB color space if you need accurate sRGB color reproduction for work.

The OSD menu is user-friendly and easy to navigate via the joystick placed at the back of the monitor. There are four hotkeys, three of which you can use as shortcuts for certain OSD functions (picture mode, brightness, volume, overdrive, input source, etc.).

There’s also a built-in sensor that can automatically adjust brightness and black level according to ambient lighting. You will find a feature called ‘SDR Variable Backlight,’ which enables local dimming (only 3-4 zones) for a slightly higher contrast ratio.

Another exciting feature is the Ambient Glow RGB lighting technology with twelve customizable (color, brightness, style) LEDs placed beneath the display. There’s an additional LED at the back of the monitor.

The design of the Acer XB273K 4K 144Hz gaming monitor is quite sturdy with fairly thick matte black bezels.

The HDMI port is limited to 60Hz at 3840×2160, but it also supports HDR, thus making the monitor great for console gaming as well.

Further, the monitor has a light anti-glare screen coating, it comes with a detachable shading hood, and there’s an active-cooling fan which isn’t loud.

Further, it uses a newer panel with a faster response time speed and features a built-in KVM switch.

Overall, the Acer XB273K is an excellent gaming monitor that ticks many boxes, but there are better alternatives for the money available nowadays.