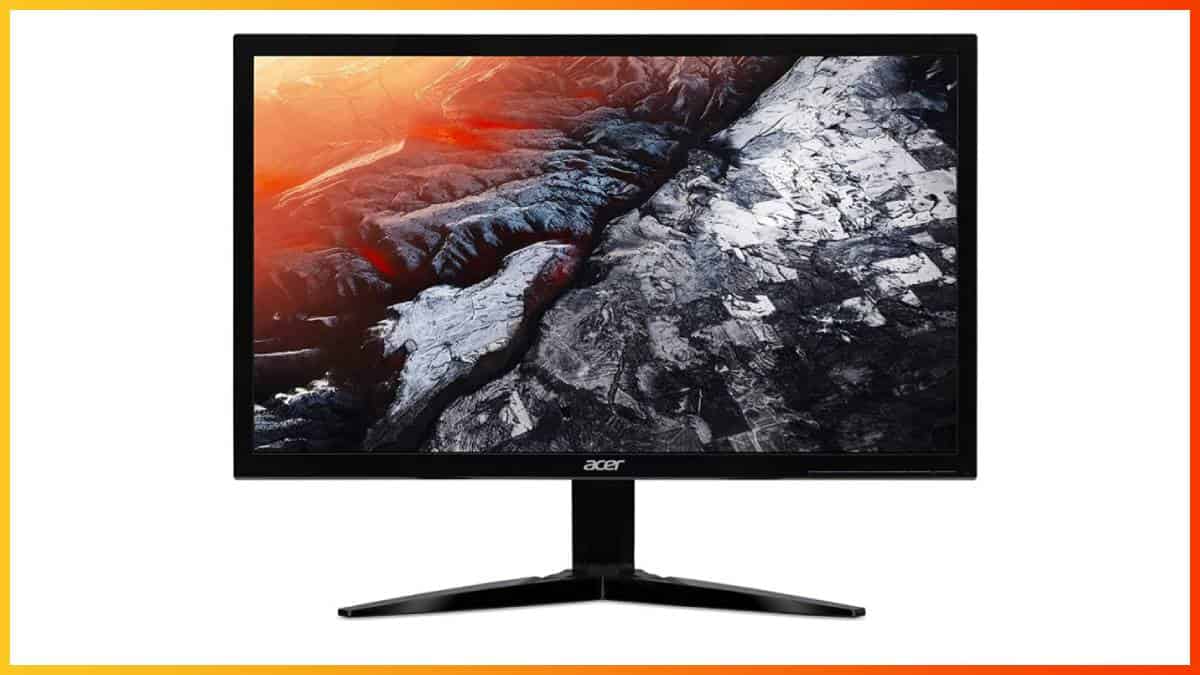 The Acer KG241QP is an affordable 144Hz gaming monitor yet it offers a buttery-smooth performance making it ideal for competitive gamers on a budget.

However, it uses an older TN panel, so if you want an immersive image quality, we recommend getting a better IPS gaming monitor.

The Acer KG241QP is yet another affordable 24″ 1080p 144Hz gaming monitor based on a TN panel with a 1ms response time speed, ideal for competitive gamers on a budget.

In this review, we’ll go over its upsides and downsides in comparison to similarly priced alternatives and everything else you need to know about it.

The full name of this monitor is Acer KG241Q Pbiip, but since there is another KG241Q bmiix model with a 75Hz maximum refresh rate, we’ll refer to this one as KG241QP to avoid confusion.

Blacks are grayish, and colors are dull in comparison to similarly priced IPS and VA panel monitors, but that’s expected from a TN panel monitor at this price range.

So, if you want an immersive image quality, this gaming monitor is not for you.

The Acer KG241QP focuses on speed rather than beauty, and so, with a GtG (gray to gray pixel transition) response time of 1ms and a refresh rate of 144Hz, it’s one of the cheapest gaming displays that’s excellent for fast-paced competitive gaming.

Another thing to keep in mind about TN monitors is the viewing angles of 170° horizontally and 160° vertically, which will cause the image to degrade in color, brightness, and contrast when you look at the screen at skewed angles.

As long as you’re sitting directly in front of the screen, though, this won’t be an issue.

Lastly, 1080p screen resolution provides a decent pixel density on the 23.6″ viewable screen of the Acer KG241QP monitor. With roughly 93 pixels per inch, details are sharp and clear!

There’s also a lot of screen real estate available, and since 1080p is not very demanding on your CPU/GPU, you will be able to maintain high frame rates in video games even with a decent budget GPU.

As we’ve already mentioned, this monitor is all about speed (and affordable pricing).

Thanks to its 144Hz refresh rate, the monitor can display over twice as many frames per second in comparison to a standard 60Hz display.

This translates to clearer and smoother motion, which is especially visible in fast-paced games such as first-person shooters and racing games.

In fact, all video games that don’t have capped frame rates will benefit from 144Hz as long as your PC configuration can deliver proper frame rates.

Another asset of the Acer KG241Q P is the rapid 1ms GtG response time speed, which will make sure that there is no visible motion blur or trailing behind fast-moving objects allowing you to focus on your targets.

Input lag is effectively cut in half in comparison to that of a 60Hz display; with just ~4ms of lag, you won’t be able to notice any delays while gaming on the Acer KG241QP display.

Moving on, the monitor supports AMD FreeSync (FreeSync Premium), which allows the display to change its refresh rate dynamically (according to frame rates) if you have a compatible graphics card.

This dynamic, or variable, refresh rate removes all screen tearing and stuttering as long as your FPS is between 48 and 144, but it doesn’t introduce as much input lag as VSYNC (only ~1ms).

FreeSync works over both HDMI and DisplayPort on this monitor up to 144Hz, and while the KG241Q P is not certified as G-SYNC compatible by NVIDIA, AMD’s FreeSync works without issues when used with NVIDIA’s cards (GTX 10-series or newer) over DisplayPort.

Finally, note that the Acer KG241QP 144Hz monitor uses a flicker-free backlight and that it has a low-blue light filter, so you can game for hours without straining your eyes.

The OSD (On-Screen Display) menu of the monitor consists of numerous useful features, and it’s quite user-friendly. There are five hotkeys that you can use to navigate through the menu.

Besides the standard image adjustment tools such as brightness, contrast, etc., the Acer KG241QP offers advanced settings as well, including gamma presets and 6-axis hue/saturation.

So, you can get a pretty decent image quality out of the monitor via calibration.

You will also find the response time overdrive setting, which we recommend setting to ‘Normal’ as the ‘Extreme’ preset introduces a lot of pixel overshoot.

However, the MBR technology is not well implemented in this case. There aren’t any meaningful adjustments available, and the screen becomes too dark when VRB is enabled.

What’s more, the colors become even duller, and you cannot use FreeSync and VRB simultaneously, so we don’t recommend using it, but you should definitely try and see for yourself.

In order to make this display so affordable, Acer had to corners somewhere. So, the stand of the monitor is tilt-only, but at least it’s fairly sturdy.

You can also detach it and mount the screen on a third-party stand via the 100x100mm VESA pattern.

Connectivity options include two HDMI 2.0 ports and a single DisplayPort 1.2 input, and there are no audio jacks or speakers. Both HDMI and DP support FreeSync and 144Hz at 1920×1080.

The bezels of the monitor are quite bulky, which makes the monitor look bigger, but if you want to have a multi-monitor setup, the thickness of the bezels will be annoying.

Lastly, the screen has a matte coating, which eliminates reflections.

Keep in mind that the Acer KG241QP slightly varies across different regions. So, some models may have a bit different stand (black color instead of red) and/or feature integrated speakers/audio jacks.

Performance, image quality, and features are the same.

The Acer KG241Q P usually goes for $180, which is too expensive, considering that you can find an IPS model, such as the LG 24GN650, with just as fast response time speed but a much better image quality, wider viewing angles, and ergonomic design for $20 more.

While the KG241QP has is an overall decent monitor, there are much better alternatives for the money.