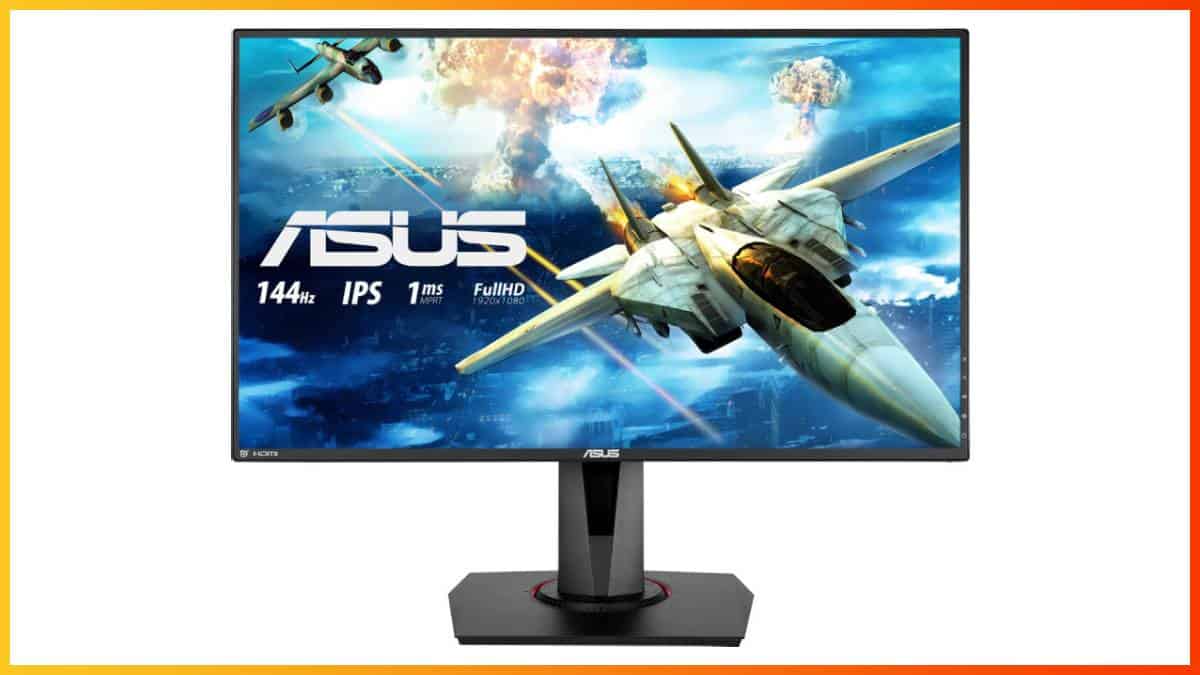 The ASUS VG279Q was the very first 1080p 144Hz gaming monitor to be available with an IPS panel. Its high price made sense back then, but nowadays, there are better and more cost-efficient alternatives available.

The ASUS VG279Q is a 1080p 144Hz IPS gaming monitor with AMD FreeSync, a rapid response time speed, and a fully ergonomic design.

This is a slight but notable improvement over the previous generation IPS displays of this caliber which have a peak brightness of 300-350 nits and a GtG (Gray to Gray pixel transition) response time of 4-5ms.

The only thing we don’t like about the ASUS VG279Q is its low pixel density due to the rather low 1080p resolution for its 27″ screen.

This means that the picture is somewhat pixelated on this display whereas a 24″ or 25″ version of the monitor would have sharper and clearer details.

In video games, this isn’t as noticeable, especially if you apply some anti-aliasing effects. But if you intend on using the ASUS VG279Q for work as well, you will have to cope with limited screen space and smudgy details.

The 3ms (GtG) response time speed is more than enough for a smooth fast-paced gaming experience without prominent ghosting and motion blur.

Basically, you get a response time performance that’s on par with TN models in addition to having vibrant colors and wide viewing angles of 178 degrees horizontally and vertically.

Moreover, you can get a CRT-like motion clarity by using the exclusive ASUS Extreme Low Motion Blur (ELMB) backlight strobing technology. In order to enable it, you will have to set your refresh rate to either 85Hz, 100Hz, or 120Hz.

The ASUS VG279Q input lag performance is very good as well amounting to around 4ms which makes the monitor easily fit for professional competitive gaming.

Lastly, the monitor has no problems concerning visual artifacts, dead pixels, nor excessive backlight bleeding. Little IPS glow is present which is expected from IPS panels and entirely tolerable/manageable.

The ASUS VG279Q 1080 144Hz IPS monitor is also equipped with AMD FreeSync/Adaptive-Sync support which allows the monitor to change its refresh rate dynamically thus eliminating all screen tearing and stuttering with basically no input lag cost.

Adaptive-sync also works with NVIDIA GTX 10-series and RTX 20-series GPUs (and newer) without any issues on this monitor.

Additionally, LFC (Low Framerate Compensation) is supported which will ensure a smooth performance even south of 40 frames per second.

Other features include the standard bells and whistles found on ASUS gaming displays such as GamePlus (crosshairs, timers, and an FPS counter), GameVisual (FPS, RTS, Racing, RPG, MOBA, sRGB, Cinema, Scenery picture presets), and Shadow Boost for better visibility of objects in dark areas of games.

While the ASUS VG279Q 1080p display has a flicker-free backlight (unless you enable 1ms MPRT) and an integrated low-blue light filter, gamma presets and color hue settings are missing in the OSD (On-Screen Display) menu.

Connectivity includes Dual-Link DVI-D (for 144Hz and ELMB), DisplayPort 1.2a (for 144Hz, ELMB, and Adaptive-Sync), HDMI 1.4a (FreeSync over HDMI up to 120Hz), a headphones jack, and two 2W integrated speakers.

The ASUS VG279Q price amounts to around $300 which is a bit expensive considering its price and features.

For over $100 less, you can get the AOC 24G2 which is a 24″ 1080p 144Hz IPS display. It will provide you with a better image quality due to its higher pixel density and wider color gamut. Its response time isn’t as fast, but for casual gaming, it’s more than quick enough.

If you’re mainly a hardcore FPS gamer, you should consider a 240Hz display at this price range such as the Acer XF252Q.

Whlie the ASUS VG279Q offers brilliant performance as well as vibrant colors and wide viewing angles, there are better alternatives at this price range.