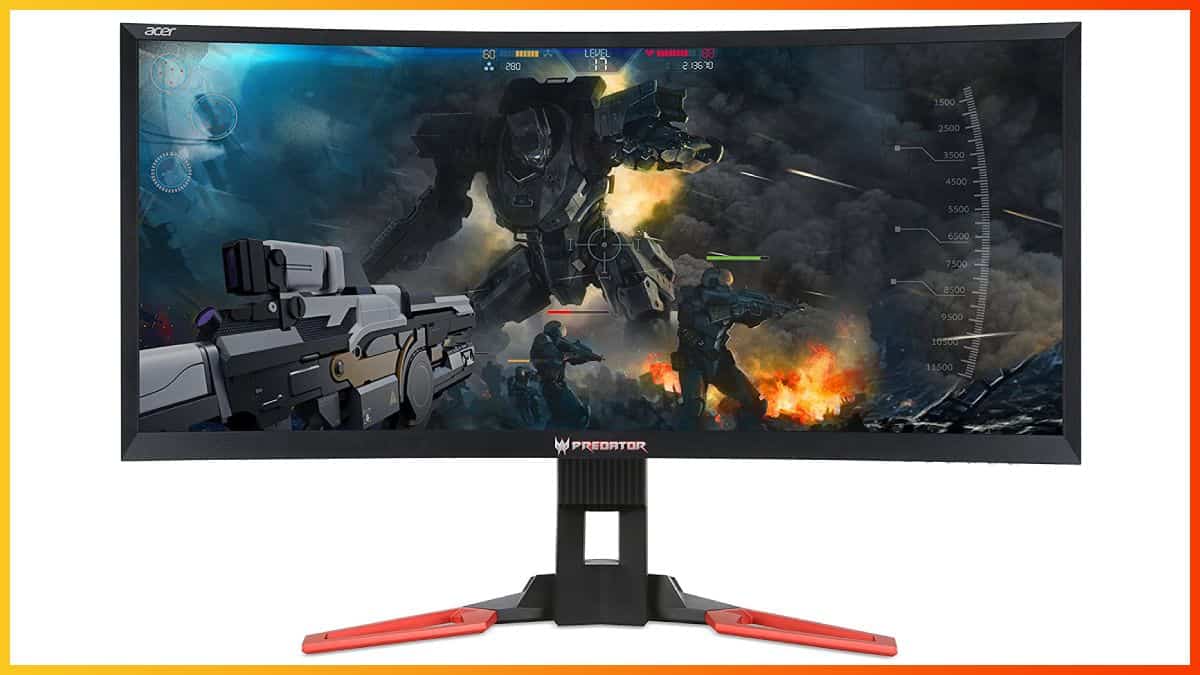 The Acer Predator Z35 is one of the fastest ultra-wide displays. However, its maximum refresh rate is held back by its slow response time. Overall, it still delivers a great gaming experience at 2560×1080/120Hz but there are better alternatives out there.

The Acer Predator Z35 is a massive 35″ ultrawide display, equipped with NVIDIA G-SYNC and ULMB technologies, as well as a fast 144Hz (200Hz OC) refresh rate for smooth and immersive gameplay experiences.

The monitor is based on a VA panel with true 8-bit color depth and 100% sRGB gamut for vibrant and rich colors.

In comparison to other panel technologies, including IPS and TN, whose contrast usually max out at 1,000:1, the Acer Z35 delivers significantly deeper black shades and an overall better ratio between the darkest and the brightest colors.

While VA panels have the best contrast ratio out of the three, they usually have the worst response time speed performance, which we’ll get into later.

Moving on, the 2560×1080 UWHD resolution is fairly low for the giant 35″ screen of the Acer Predator Z35 monitor. Consequently, this results in a poor pixel density of 79 pixels per inch.

Such low pixel density makes for little screen real estate, which isn’t an issue for gaming, but if you plan on using the monitor for work too, you may find the lack of screen space deal-breaking.

The viewing angles are 172° horizontally and 178° vertically, so they aren’t as wide as on IPS panels, but they are much better than that of TN panels.

As a result, some tiny shifts in contrast, brightness, and color are expected when looking at the screen at certain angles, but as long as you’re in front of the screen, this won’t be a problem.

The color quality is similar to that of IPS panels though the blacks are deeper. However, the colors aren’t as accurate and consistent as they are on IPS displays, which are thereby preferred for color-critical tasks.

Next, the Acer Predator Z35 input lag performance is flawless with only ~5ms of delay, which is practically unnoticeable.

As previously mentioned, the weakest point of most VA panels is the response time speed, and the Acer Z35 is no exception.

There’s noticeable smearing of fast-moving objects, particularly when dark pixels are involved. Of course, this is tolerable as, in return, you get deep blacks, so it’s a fair trade-off.

If you are a hardcore competitive FPS gamer, however, you’d be better off with a faster gaming monitor with a 1ms GtG pixel response time speed.

Unfortunately, the pixel transition time can’t keep up with such high refresh rates, which means there’ll be even more ghosting and motion blur present. So, it’s best to keep it at 144Hz.

This is where NVIDIA’s Ultra Low Motion Blur (ULMB) technology kicks in.

Once you enable this feature, the display will strobe the backlight, which will eliminate some of the ghosting and trailing in fast-paced games.

Note that ULMB causes the screen to have a lower brightness; using the Pulse Width setting, you can change the effectiveness of ULMB from 10 to 100. The higher the frequency of the backlight strobes, the lower the brightness – and vice versa.

Overall, even with Pulse Width set to 100, the screen is reasonably bright for a comfortable gaming experience.

Note that you cannot use ULMB with AMD cards nor at the same time as G-SYNC.

It achieves this by allowing the monitor’s refresh rate to change according to the GPU’s frame rate.

Other exciting gaming features include Aim Point customizable crosshair overlays, Dark Boost for better visibility in dark areas of games, and three profiles where you can save custom picture settings.

The Acer Predator Z35 G-SYNC gaming monitor also features an RGB lighting technology with LEDs placed beneath the bottom bezel. You can select different colors and effects in the Ambient Light settings in the OSD menu.

There are six monitor hotkeys that you can use for the following functions when not in the OSD menu: swap between the Game Mode profiles, change the Overdrive setting, adjust audio volume, change input source, open/close the OSD menu, and power on/off.

The Overdrive setting has three options: Off, Normal, and Extreme. We suggest leaving it at ‘Normal’ as ‘Extreme’ introduces inverse ghosting.

Lastly, you will find advanced color adjustments such as 6-axis, gamma, and saturation, as well as the standard contrast, brightness, sharpness, RGB color, etc. settings. 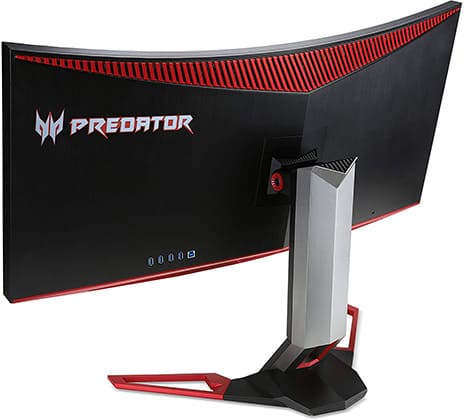 While the design may not appeal to everybody aesthetically, it is quite robust and ergonomic with up to 130mm height adjustment, -5°/25° tilt, and 100 x 100mm VESA mount compatibility; you cannot swivel the monitor.

At the back of the monitor, you will find four downstream and one upstream USB 3.0 port. Display ports include HDMI (max 60Hz) and DisplayPort 1.2 for up to 200Hz and G-SYNC. There’s also a headphones jack and two loud 9W DTS speakers.

The Acer Predator Z35 price is a little under $700, which is rather expensive.

Overall, the Acer Predator Z35 is a solid ultrawide monitor. However, the 200Hz refresh rate is over-ambitious for its weak pixel transition performance, which makes going over 144Hz or even 120Hz obsolete.

The picture quality is great thanks to the high contrast ratio, and there are a lot of useful features available, but for fast-paced games, the IPS ultrawides are simply a better choice.