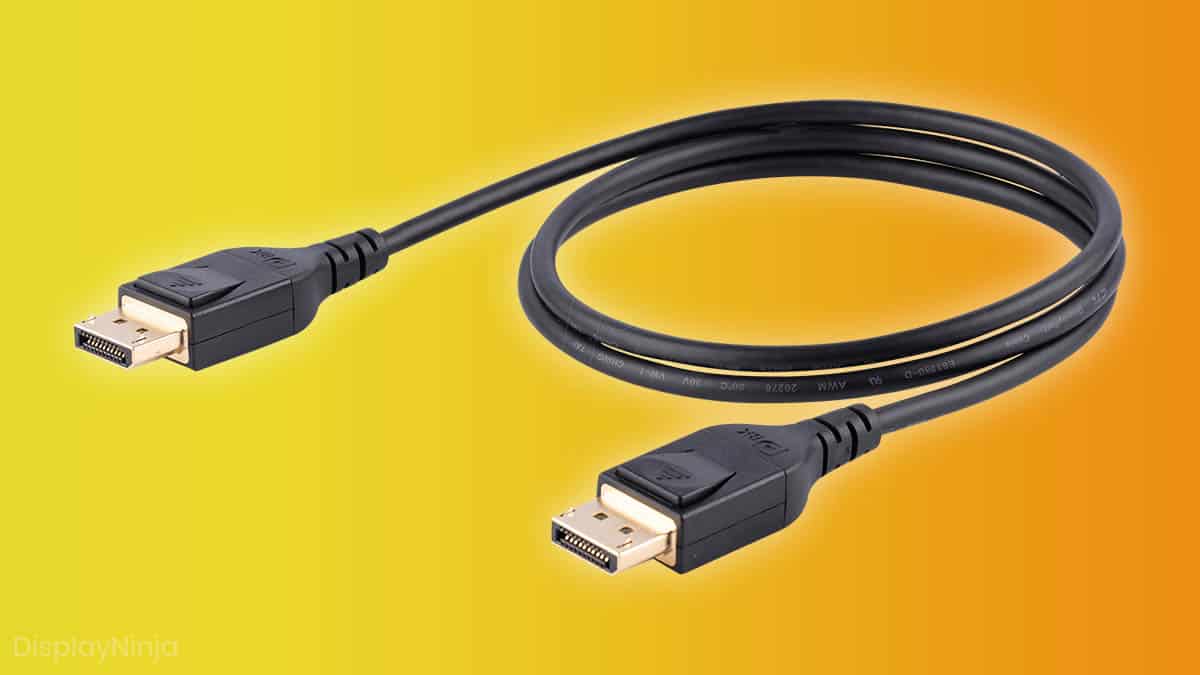 VGA (Video Graphics Array) or D-Sub is an old analog connector that maxes out at 1920×1200 and 75Hz. Most of the newer graphics cards and displays don’t feature this port.

It can still be found on some monitors, though, which can be useful if you want to connect it to an older GPU or use it for a multi-monitor setup.

DVI (Digital Visual Interface) is a more common and widespread connector, but bear in mind that not all DVI versions are the same.

However, keep in mind that some monitors have limited bandwidth over HDMI 1.4 making it max out at 120Hz or even at 60Hz in some cases (mostly G-SYNC and older monitors).

In fact, most 144Hz monitors are limited to 120Hz over HDMI 1.4, but some monitor manufacturers will utilize custom timing parameters and pixel rates to use the full potential of the HDMI 1.4 bandwidth, thus getting 144Hz at 1080p.

The latest HDMI 2.1 adds native support for 144Hz at 4K UHD and 60Hz at 8K. However, to see just how much bandwidth an HDMI 2.1 port has on a monitor will depend on its implementation (FRL6 has 48Gbps, FRL5 has 40Gbps, etc.). Be sure to visit our article on misleading/confusing HDMI 2.1 specifications to learn more.

Note that there’s no such thing as an HDMI 1.4 or 2.0 cable. Instead, you should look for an HDMI cable with enough bandwidth to support your monitor’s maximum screen resolution and refresh rate over its HDMI port.

For HDMI 2.0, you’ll need a cable rated for at least 18 Gb/s and labeled as ‘Premium Certified Cable‘ or ‘Premium High Speed.’

The main difference between DP 1.3 and DP 1.4 is that the latter supports DSC (Display Stream Compression), which allows it to deliver 144Hz at 4K, 120Hz at 5K and 60Hz at 8K — but with compression.

Furthermore, mini-DisplayPort is now being replaced by the USB Type-C port on newer displays.

The USB-C port sends the DisplayPort signal for audio and video and can simultaneously charge (if the device supports power delivery) and transfer data to the connected device.

For DisplayPort 1.4, look for a cable rated for 32.4 Gbps and HBR3 bit rate class. DisplayPort cables are backward-compatible as well. If you need a cable longer than 33ft (15 meters), you’ll need to look for an active cable.

In the table below, you can check the maximum interface bandwidth for popular resolution and refresh rate combinations.

Note that 8-bit color depth and full 4:4:4 RGB signal are assumed for each interface except for the ones using DSC, in which case 10-bit color is assumed.

In case your 144Hz monitor and graphics card do not support 144Hz over the same port type, you may be able to use an adapter.

In the table below, you will find all the currently available adapter combinations for 1080p 144Hz or higher. Keep in mind that when using an adapter, the output/input order is important.

When it comes to DVI adapters, the DVI-D adapter needs to be active, not passive which means it will usually use a USB connector for power. Moreover, for 144Hz, you will need a Dual-Link DVI-D adapter, Single-Link won’t work.

The available active adapter combinations are:

Note that these active adapters are fairly expensive and that some manufacturers will falsely advertise passive adapters as active and/or Single-Link DVI adapters as Dual-Link.

Also, double-check whether your monitor/GPU supports 144Hz over the port you’re trying to convert before buying an expensive active adapter.

You may have seen the term ‘fake HDMI 2.1’ around due to the misleading and confusing latest updates to the HDMI 2.1 specification.

Basically, the HDMI 2.0 specification has been replaced by HDMI 2.1. So, a monitor advertised to have an HDMI 2.1 port doesn’t necessarily have to support the full 48 Gbps bandwidth or have some of its features, such as HDMI-VRR. It’s up to the manufacturer to specify what features and bandwidth of HDMI are supported.

So, an HDMI 2.1 monitor with 4K 144Hz might be limited to 60Hz over its HDMI port. Luckily, most manufacturers still stick to advertising such displays as ‘HDMI 2.0.’

In short, if you’re interested in a gaming monitor with HDMI 2.1, you’ll have to pay close attention to its HDMI capabilities specified by the manufacturer, or check reviews. Visit our article on misleading/confusing HDMI 2.1 specifications to learn more.

Moreover, most monitors with dedicated G-SYNC modules are limited to 60Hz over HDMI.

My laptop/PC only has an HDMI port, but my monitor supports 144Hz over DisplayPort.

You will need an active HDMI to DP adapter. Note that this adapter allows for up to 120Hz at 1080p only.

My laptop/PC only has an HDMI port, but my monitor supports 144Hz over Dual-Link DVI-D.

You will need an active HDMI to DL-DVI-D adapter. Unfortunately, no such adapter currently exists. You will need a monitor that supports 144Hz over HDMI or at least over DisplayPort in which case you could use an HDMI to DP adapter.

My laptop/PC only has a Mini DisplayPort port, but my monitor supports 144Hz over DisplayPort.

My laptop/PC only has a Mini DisplayPort port, but my monitor supports 144Hz over Dual-Link DVI-D.

You will need an active Mini DisplayPort to DL-DVI-D adapter. Remember that this adapter allows for up to 120Hz at 1080p only. Using a passive or Single-Link DVI-D adapter will limit you to 60Hz at 1080p.

My laptop/PC only has a Mini DisplayPort port, but my monitor supports 144Hz over HDMI.

You will need a Mini DisplayPort to HDMI adapter. A passive adapter will be enough for 1080p 120Hz.

My laptop/PC only has a USB-C port, but my monitor supports 144Hz over DisplayPort.

Given that the USB-C port on your laptop supports Thunderbolt 3 or DisplayPort Alternate Mode, you will need a USB-C to DP adapter/cable.

My laptop/PC only has a USB-C port, but my monitor supports 144Hz over Dual-Link DVI-D.

You will need a USB-C to DL-DVI-D adapter. Unfortunately, no such adapter exists. There are USB-C to Single-Link DVI adapters, but these are limited to 1080p at 60Hz.

My laptop/PC only has a USB-C port, but my monitor supports 144Hz over HDMI.

Given that the USB-C port on your laptop supports Thunderbolt 3 or DisplayPort Alternate Mode, you will need a USB-C to HDMI adapter/cable.

What Is V-SYNC And Is It Worth It?