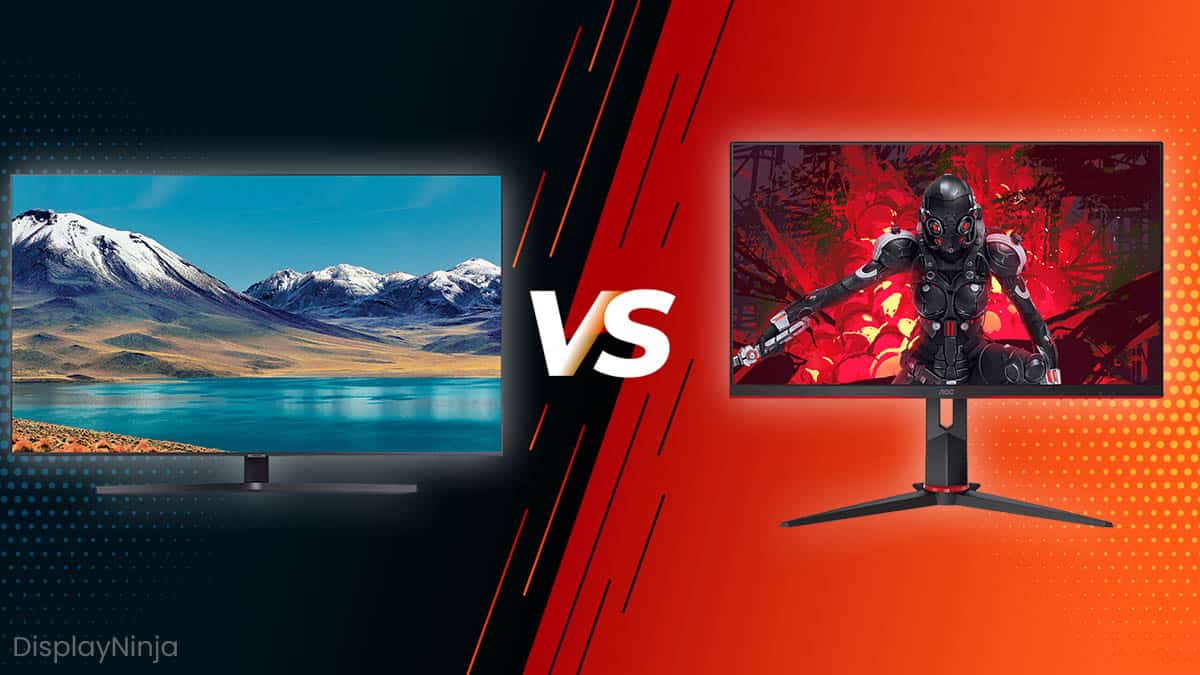 Monitors usually have lower input lag, higher refresh rates and faster response time than TVs, which make them a better choice for gaming (there are exceptions, such as OLED TVs).

On the other side, TVs are larger and more affordable, so they are fantastic for watching movies and TV shows, as well as console gaming.

Are you wondering if you should get a new TV or a new monitor?

Whether you are considering using a TV as a PC monitor (or vice versa) or you are just looking for a brand new screen, you should know all the differences between these two types of displays before making the final decision.

We’ll fill you in on everything you need to look out for when buying a new TV or monitor for both everyday use and gaming.

TV vs. Monitor – Everyday Use

When buying a new TV, most people prioritize the size of the screen.

However, screen resolution and panel type, among other things, play a more significant role when it comes to image quality.

Since more and more content is becoming available in 4K Ultra HD resolution, if you are buying a brand new TV nowadays, it should definitely support 4K.

While TVs are only available in Full HD and 4K UHD resolutions, monitors have an in-between option called QHD with 2560×1440 pixels. Moreover, there are ultra-wide monitors with 21:9 and 32:9 aspect ratios for a more immersive viewing experience.

The ratio of screen resolution/screen size is called pixel density, which measures how many pixels per inch are there. Generally, 1920×1080 resolution is fine for a 32-inch TV, but not for a monitor larger than 24″.

This is because low pixel density makes small items on the screen, such as text, appear smudgy and blurry if you’re looking at the screen from up close. The chart below depicts the ideal watching distance for a particular screen size/resolution. 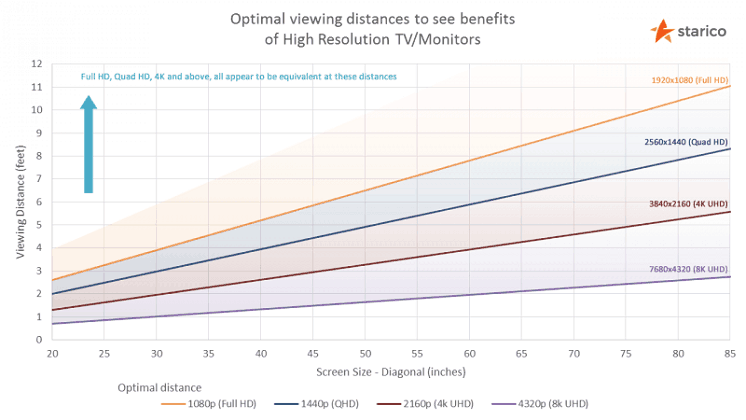 If you’re buying a high-end 4K TV, it should also support HDR, which provides you with brighter and more vibrant image quality for compatible content.

While HDR is widely supported for TVs in terms of both hardware and content, true HDR monitors are just beginning to surface; what’s more, there’s not a lot of HDR content for PC, and Windows’ HDR implementation is very buggy.

After you’ve considered all of the points mentioned above, there are additional things to keep in mind when looking for a display for gaming.

When it comes to console gaming, a TV can be a better choice since you are sitting further away from the screen, so the display can be larger. However, you need to ensure the TV has some sort of image post-processing bypass mode, usually simply called “Game Mode.”

This feature considerably lowers input lag, which is a must if you wish to have smooth and responsive gameplay. We recommend that the TV has less than 16ms input lag —ideally, less than 8ms if it supports 120Hz.

Another vital thing to keep in mind is the display’s response time speed, and since TV manufacturers don’t put this specification on the paper as they do with monitors, you will have to do some research.

While an average IPS panel monitor has a response time speed of ~5ms, an IPS panel TV has around 15ms, which will result in more visible ghosting and trailing behind fast-moving objects.

In short, if you’re looking for a TV for gaming, make sure it has low input lag (Game Mode feature), and it should preferably have an IPS panel as VA panels have a slower response time.

Additionally, it’s even better if you can afford an OLED TV, which has a faster response time speed than any LED-backlit gaming monitor. Sadly, these are only available in sizes of 42″ or larger.

A gaming monitor can have a refresh rate of up to 390Hz (up to 540Hz in 2023!), which provides you with the most responsive and fluid fast-paced gaming. TVs, on the other hand, are usually limited to 60Hz or 120Hz.

Furthermore, some TVs offer features such as LG TruMotion120, which is supposed to convert 60 FPS (Frames Per Second) content into 120 FPS. However, these are fake frames and will more likely have an adverse effect on the image and gameplay experience.

You can read more about this frame interpolation technology here.

Overall, if you want a high refresh rate TV, make sure it’s ‘true 120Hz’ and not using motion interpolation, also known as the ‘soap opera effect.’

This technology requires a compatible graphics card and, in turn, provides you with a variable refresh rate that removes all screen tearing and stuttering.

The Xbox One and Series S/X gaming consoles support AMD FreeSync up to 120Hz.

So, in this case, a FreeSync 120Hz+ gaming monitor is a perfect choice if you play both PC and console games.

Nowadays, there aren’t many viable OLED monitors for everyday use or gaming. There are a few models, such as the Dell AW3423DW.

OLED TVs, on the other hand, are available in sizes ranging from 42″ and up, which most PC gamers find too big for desktop use.

So, if you want an OLED display for gaming right now, you can only pick between an ultrawide model (AW3423DW) and a 42″ or larger TV.

As you can see, there are a lot of differences between a TV and a monitor, and the choice between the two mostly depends on what type of content you’ll be browsing through and what games you will be playing.

What Is sRGB Emulation Mode And Why Is It Important?