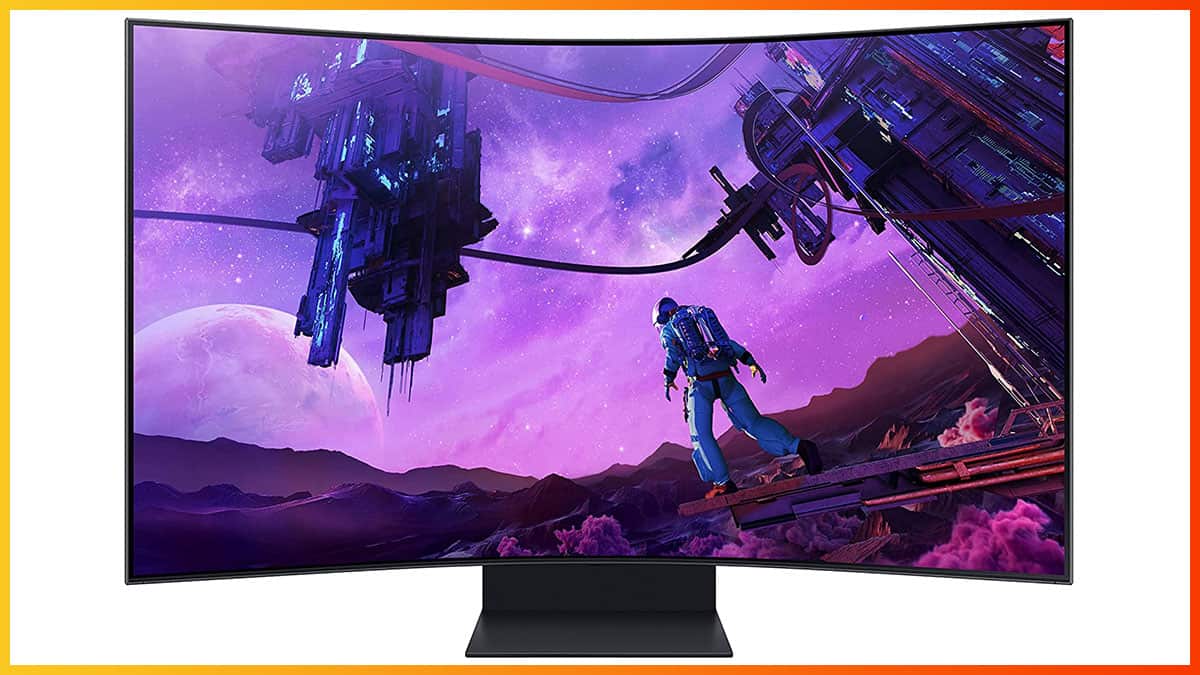 The Samsung Odyssey Ark is an excellent and innovative monitor that delivers an immersive gaming and viewing experience, as well as plenty of useful and unique features. Its price, however, is not as appealing.

The Samsung S55BG970 Odyssey Ark is an innovative smart monitor that offers immersive gaming and viewing experience in both vertical and horizontal orientations!

The monitor is based on a VA panel with a static contrast ratio of 3,000:1.

However, thanks to its full-array local dimming solution with 1056 zones, the Odyssey Ark can dim parts of the screen that are supposed to be dark without affecting the areas that are supposed to remain bright, thus effectively boosting the contrast ratio up to 1,000,000:1.

Further, the mini LED backlight is capable of reaching up to around 1,300-nits for small (10% window size) bright highlights and it can sustain an exceptionally bright 600-nits for a full white window!

As a result, you get deep and inky blacks as well as bright and punchy highlights at the same time. Moreover, the panel is enhanced with a quantum dot film for vibrant colors, covering 95% of the DCI-P3 color space.

Naturally, as there are ‘only’ 1056 dimming zones across the gigantic 55” sized screen with over 8 million pixels, some blooming will be noticeable in certain scenes.

Blooming occurs when the light of a lit zone bleeds into the surrounding dimmed zones. It mostly happens with small bright elements in the dark, such as scenes with stars in the night sky, fireworks, etc.

On OLED displays, each pixel is self-emissive, so you don’t have this issue, but you don’t get as high brightness as that of LED-backlit screens, and you don’t have to worry about OLED burn-in.

Moving on, the 4K UHD resolution looks decent even on 55″ displays. You get a pixel density of 80.69 PPI (pixels per inch), which is similar to that of a 27″ 1920×1080 monitor, however, as you’ll be sitting further away from the screen, individual pixels won’t be as noticeable.

In fact, at a distance of around 3.5ft (~107cm), your eyes won’t be able to perceive the individual pixels at all.

Note that the Samsung Odyssey Ark uses a BGR subpixel layout, so make sure you set up Windows ClearType properly for improved text clarity. This won’t be an issue when playing games or watching videos.

When variable refresh rate (VRR) is enabled, you cannot change the overdrive, but the default mode successfully prevents ghosting at high frame rates without introducing overshoot at low frame rates. If you’re not using VRR, stick with the ‘Faster’ mode since ‘Extreme’ adds too much inverse ghosting.

Input lag amounts to around 3ms, which makes for imperceptible delay between your actions and the result on the screen.

The backlight of the monitor is flicker-free and there’s an integrated low-blue light filter. Further, there’s a sensor that can automatically adjust screen brightness according to ambient lighting.

At the rear of the display, there’s a directional joystick for navigation through the OSD (On-Screen Display) menu, but you also get two remote controllers with various shortcuts for easier and faster adjustments.

The stand of the monitor can pivot by 188°, allowing you to easily switch it to the portrait position, or ‘Cockpit mode.’ Auto-Pivot is supported, so the image will automatically change from landscape to portrait as well.

Next, the MultiView feature can split the screen into four windows for landscape position, and three windows for portrait position, so that you can effortlessly snap various applications to different parts of the screen. We also suggest trying out Window’s free FancyZones utility for more customization.

Now, one of the most interesting features of the Odyssey Ark is the ability to mimic different display form factors.

For instance, you can change the aspect ratio to 21:9 (3840×1600) or 32:9 (3840×1080) for a wider field of view in supported PC games. While this will display black bars at the top and bottom of the screen, the local dimming zones will make them entirely black, so they won’t be as distracting as they’d be on regular screens.

You can also simulate different-sized displays (from 27″ to 55″) and move them around the screen via the Flex Move Screen feature and, optionally, use ‘Active Ambient‘ to fill the rest of the screen with similar colors and patterns to that of your content.

Another interesting mode is Minimap Zoom. It splits the screen in half horizontally, providing you with a 49″ 32:9 3840×1080 display on the bottom and an enlarged minimap at the top.

Basically, you can think of the Samsung Odyssey Ark as two 49″ 32:9 super-ultrawide monitors stacked on top of each other in its landscape position – or three ~32″ 16:9 displays stacked vertically in its Cockpit mode.

Sadly, Picture by Picture is not supported, so you cannot display multiple sources at once.

Next, the screen has a steep 1000R curvature for added immersion and a light matte anti-glare coating that prevents reflections without adding too much graininess to the image.

Connectivity options on the monitor itself include a headphone jack, a USB-C input for a webcam and a port for the One Connect Box, which is an external device with other connectors.

The One Connect Box has four HDMI 2.1 ports (one with eARC), an Ethernet port, digital audio output, a dual-USB 3.0 hub (2 downstream + 1 upstream) and the ‘ex-link’ port for service.

Bluetooth 5.2 and WiFi 5 are supported too, and the Samsung Odyssey Ark has integrated 2.2.2 channel speakers with 60W total for excellent audio quality and Dolby Atmos support.

At the rear of the monitor, there’s the Eclipse RGB lighting. The LEDs are strong enough to reflect off of the wall and create atmospheric lighting in a dark room – you can even synchronize the LEDs to on-screen content.

The Samsung Odyssey Ark price amounts to $3,500, which is quite steep. However, it’s one-of-a-kind and offers plenty of unique features, so if you find it enticing and can afford it, it might be worth considering.

If you’re looking for something similar but cheaper, check out the Samsung QN90A 55″ mini LED TV or the Samsung S95B 55″ QD-OLED TV. These are regular flat-screen TVs, the last curved model is the TU8300, but it lacks important features, such as local dimming and 120Hz; it also only has a very subtle 4200R screen curvature.

Another alternative worth considering is the Samsung Odyssey Neo G9. It’s a 49″ 5120×1440 240Hz super-ultrawide gaming monitor. It’s basically half the screen of the Odyssey Ark horizontally, but it has a higher pixel density and more dimming zones.

All in all, the Samsung Odyssey Ark is an amazing display for gaming and other entertainment purposes. However, we find that its price is simply too high.