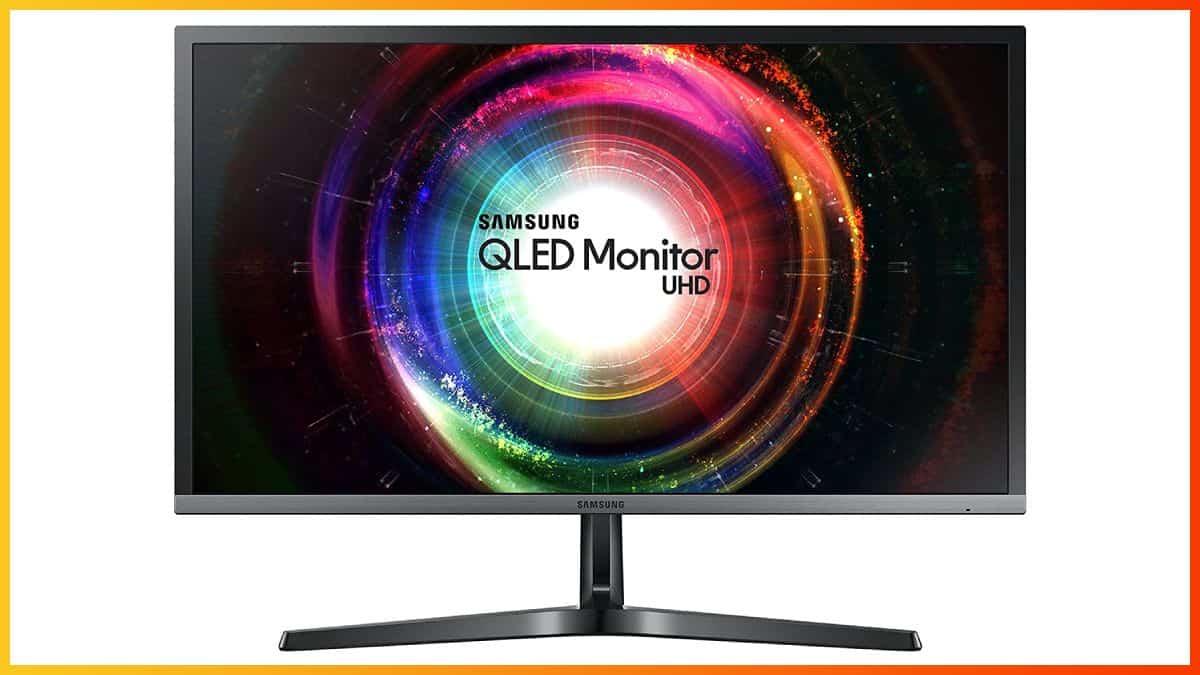 The Samsung U28H750 is a great gaming monitor that offers smooth performance and exceptional image quality for a TN-panel display.

However, consider the similarly-priced IPS alternatives as they offer almost just as fluid performance, but better image quality and wider viewing angles.

The Samsung U28H750 is a 28″ 4K monitor with a TN panel that uses quantum dots (QLED) to improve the color gamut of the display.

TN panels are praised for their rapid 1ms response time speed, which removes trailing and motion blur of fast-moving objects; that’s why they are ideal for fast-paced video games.

However, such fast pixel transition speed comes at a cost as TN panels also have very narrow 160°/170° viewing angles, which make the picture shift in color, contrast, and brightness when you look at the screen from certain angles.

Additionally, in comparison to IPS and VA panels, TN monitors have the worst color quality and a mediocre contrast ratio.

The Samsung U28H750, however, features the quantum dot technology, which boosts its color gamut to 125% sRGB for more vibrant and saturated colors.

Other panel-related specs include a decent 300-nit peak brightness and a contrast ratio of 1,000:1, which is standard.

On balance, the Samsung U28H750 monitor offers a fantastic image quality for a TN-panel display, but it’s still behind IPS and VA.

And while it does offer a notably faster response time speed in comparison to VA panels at this price range, the difference is minimal when you compare it to a similarly priced 4K IPS monitor.

Lastly, 4K Ultra HD resolution ensures stunning detail clarity and plenty of screen real estate thanks to the rich pixel density of roughly 158 pixels per inch. Keep in mind that for PC gaming at 4K, you will need quite a powerful configuration, even for 60Hz.

The Samsung U28H750 input lag performance is excellent, with only ~10ms of imperceptible delay making it fit for competitive gaming.

FreeSync is supported over both DisplayPort and HDMI, meaning that you can use it with Xbox One. The Samsung U28H750 FreeSync range is 40-60Hz in the Ultimate Engine setting.

When using FreeSync and an NVIDIA card with DisplayPort 1.2a, the Samsung U28H750 keeps disconnecting, requiring you to power cycle the monitor to get it to work with FreeSync again. So, it’s not quite G-SYNC compatible, though this may change with further NVIDIA driver updates.

You will also find all the standard adjustments, including brightness/contrast, sharpness, color temperature, and three gamma presets. The Samsung U28H750 QLED monitor has a flicker-free backlight, so if you are sensitive to screen flickering, you won’t get headaches after looking at the screen for prolonged periods.

The matte black design consists of thin bezels and a slim profile, while the base is metallic and provides excellent stability without any wobbling.

At the back of the monitor, there’s a joystick for easy navigation through the OSD (On-Screen Display) menu, while the screen is coated with an anti-glare coating, which eliminates reflections.

For around the same price, however, you can get a 28″ 4K monitor with an IPS panel such as the ASUS VG289Q with just as wide color gamut, pretty much just as fast response time, and better 178° viewing angles.

We also recommend having a look at our best gaming monitors for Xbox One X and PS4 Pro and best 4K PC monitors buying guides.

While the Samsung U28H750 display manages to improve the image quality of its TN panel display and keep the rapid response time speed, there are various IPS-panel alternatives available that offer just as a responsive gaming experience and a notably better image quality with HDR, wide viewing angles, and other bells and whistles.