The Samsung C27H711 offers great image quality and smooth performance. However, there are better alternatives available for the money.

The Samsung C27H711 is a 27″ 1440p curved monitor based on a quantum-dot LED backlight (QLED) that delivers wide color gamut and superior contrast ratio for a more immersive viewing experience.

The monitor is based on a VA panel with a static contrast ratio of 3,000:1 and a peak luminance of 300-nits which, in comparison to other panel technologies (IPS and TN), results in more vivid dark shades and an overall more distinct relation between the darkest and the brightest colors.

It supports 8-bit color depth without dithering (true 8-bit) and thanks to the quantum dots, it covers 125% of the sRGB color gamut which translates to lifelike and vibrant colors.

VA panels also have wide 178-degree viewing angles for a great viewing experience even when you’re looking at the screen at an angle.

Lastly, 1440p resolution on a 27″ screen (2560×1440, WQHD) ensures incredible detail clarity and plenty of screen real estate without any scaling necessary. The 32″ model, on the other hand, has a lower pixel-per-inch ratio and offers the same pixel density as 1080p on a 24″ display.

While the performance of the Samsung C27H711 monitor is top-notch, it’s missing a high refresh rate since at this price range, you’d expect to see 144Hz.

The native 60Hz refresh rate can be upped to 75Hz by enabling AMD FreeSync in the OSD (On-Screen Display) menu.

The input lag is fairly low at around 10ms which makes for unnoticeable delay while the response time of 4ms (GtG) is sufficient to eliminate most of trailing and motion blur of fast-moving objects.

Moreover, the Samsung C27H711 curved display has a flicker-free backlight and Eye Saver Mode which reduces the emission of harmful low-blue lights.

Overall, you get a decent gaming experience; the colors and contrast are exceptional, and there’s no prominent ghosting, input lag, or other visual artifacts. However, for less money, you can get a 27″ 1440p gaming monitor (such as the Viotek GN27DB) that also has a VA panel and a curved screen – plus a 144Hz refresh rate.

It may not have quantum dots, but its performance improvement over that of the CH711 outweighs the difference in image quality; not to mention that it’s actually cheaper and that its VA panel also offers the same 3,000:1 contrast ratio, it just has less saturated colors. 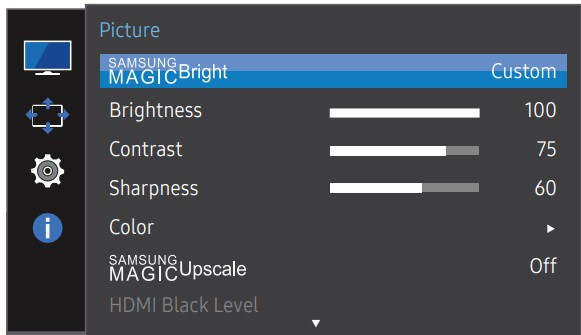 The OSD menu is navigated using the 4-way joystick placed beneath the screen.

There is also Samsung MagicUpscale which enhances the image quality of low-resolution content and Game Mode which increases visibility in darker games. 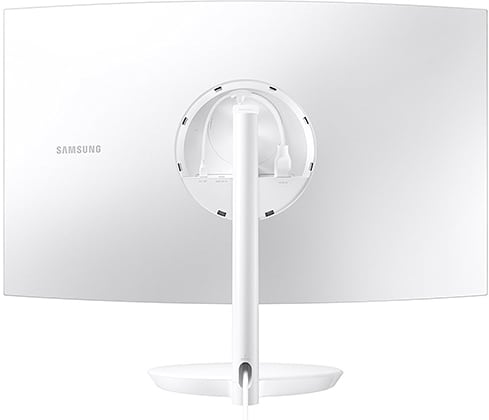 The Samsung C27H711 QLED monitor has a rather interesting design with an innovative cable management system.

The ports (one of each: HDMI 1.4, DisplayPort 1.2 port, DC power) are placed behind the removable cover while the cables can be guided through the stand and thereby be concealed.

Unfortunately, this unique design comes at a cost of ergonomics; there’s no VESA mount pattern and the stand is tilt-only by up to -4°/17°. The monitor is also very slim, has ultra-thin bezels, and a light matte anti-glare coating.

The Samsung C27H711 price amounts to around $380 which is, as previously stated, quite steep. For around $50 less, you can get the Viotek GN27DB instead with a 144Hz refresh rate.

If you don’t care for a high refresh rate, but would rather have a more affordable 27″ 1440p display, be sure to check out the AOPEN 27ML1U. It has an IPS panel which offers more accurate and consistent colors, and it’s over $100 cheaper.

For more similarly priced monitors with better value/money, check out our best gaming monitor under $400 guide.

The Samsung CH711 series displays were among the first monitors to feature the quantum-dot technology. Back then, the premium cost could be justified due to it being the next ‘new thing’.

Nowadays, however, there are numerous more affordable and better displays available. So, we don’t recommend the Samsung C27H711 unless you can find it under $300 on a sale somewhere.