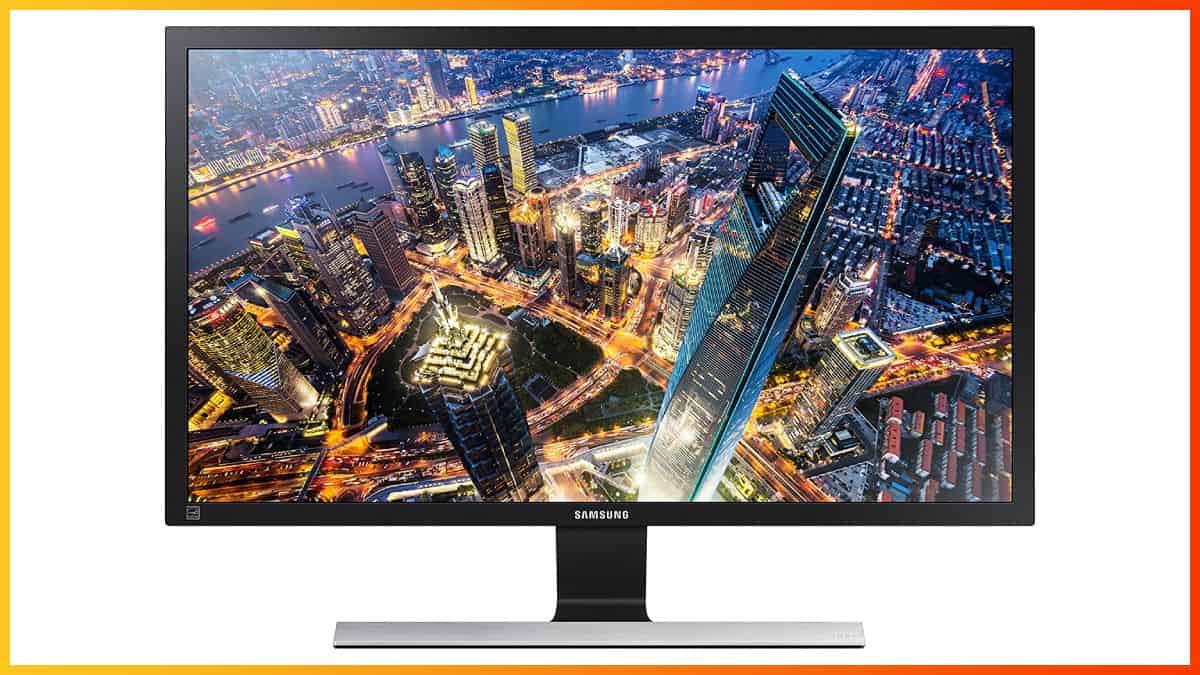 The Samsung U28E590D is one of the cheapest 4K monitors available making it an ideal display for those with a limited budget.

However, it also lacks certain features that are available in slightly more expensive but significantly better alternatives.

Looking for a cheap 4K monitor?

The Samsung U28E590D (UE590) is one of the most affordable 4K Ultra HD monitors you can get, but there are many things you should keep in mind before considering it right now.

First of all, the Samsung U28E590D monitor features a TN panel, which in comparison to IPS and VA panels, delivers an inferior image quality due to its narrow viewing angles and bad color reproduction.

The 4K resolution, however, will ensure that the image is sharp and crisp with maximum details and plenty of screen space.

For PC use, keep in mind that the monitor will require scaling due to its high pixel density, and some applications don’t scale all that well. We can’t really blame the Samsung U28E590D monitor for this as certain apps are simply poorly-optimized.

Besides support for 10-bit color depth via dithering (8-bit + FRC) and 4K resolution, the Samsung U28E590D display boasts a peak luminance of 370-nits, which will ensure that the picture is bright even in well-lit rooms.

The viewing angles of 160° vertically and 170° horizontally will cause the picture to shift in color/contrast when looking at it from skewed angles, which is an expected drawback of TN panels.

One of the main things to keep in mind about the Samsung U28E590D is that it doesn’t support HDCP 2.2, meaning that you will not be able to watch HDCP2.2-protected content in 4K on Blu-rays and certain streaming services such as Amazon Video and Netflix.

The monitor does support HDCP 1.4, which means that the protected 4K content can be played, but at 1080p max. PC and console games, as well as other apps will run at 4K without any issues, though.

Moving on, while TN panels have the worst viewing angles and colors, they do have the fastest response time speed of only 1ms.

This will remove most of ghosting or trailing behind fast-moving objects in fast-paced games, thus providing you with buttery-smooth motion clarity.

The image straight out of the box is a bit underwhelming, but after some quick calibration, it gets notably better.

Although the Samsung U28E590D supports AMD FreeSync, it doesn’t work over HDMI, only over DisplayPort. So, if you have an Xbox One console, you won’t be able to utilize the monitor’s variable refresh rate.

On the other hand, if you have a FreeSync-compatible graphics card, you can synchronize the Samsung U28E590D refresh rate with the GPU’s frame rate and thus eliminate screen tearing and stuttering.

Other features include Picture in Picture and Picture by Picture as well as Game Mode, which increases visibility in dark parts of games by altering the gamma curvature.

The monitor is also flicker-free and has an Eye Saver mode, which filters out the harmful blue-lights so you can work or play for hours without straining your eyes.

The Samsung U28E590D has reasonably thick bezels while the T-shaped stand is quite sturdy and won’t cause the screen to wobble.

Apart from -5/20 degree of tilt adjustment, there aren’t any other ergonomic abilities, though you can VESA mount the screen via the 75x75mm pattern.

The current price for the Samsung U28E590D is around $300, which is a bit steep considering its lack of features. It’s also available as a newer version, the Samsung U28E570D, but it doesn’t support HDCP 2.2 either.

For the same price, you should get the ASUS VG289Q with an IPS panel.

It’s basically just as fast as the Samsung U28E950D, but it also offers much better colors, wider viewing angles, a more ergonomic and stylish design, and FreeSync support over both HDMI and DisplayPort.

While the Samsung U28E590D was one of the cheapest 4K monitors available back in the day, there are simply much better options out there for the same price nowadays.