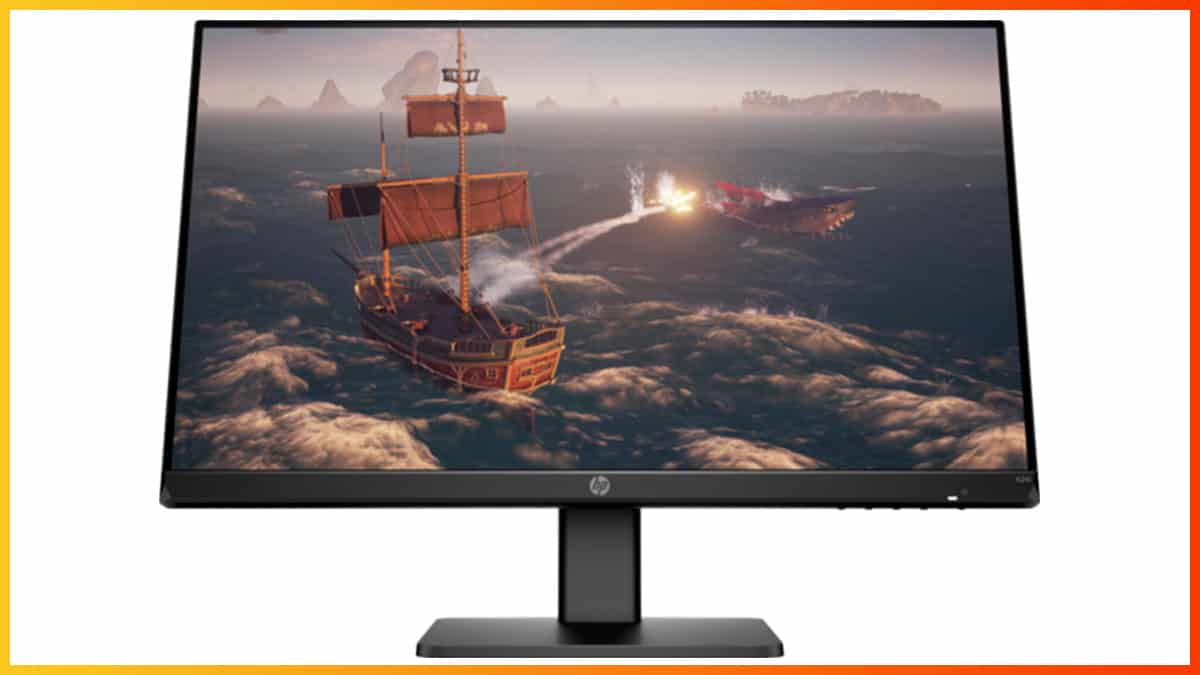 The HP X24i offers a crisp image quality with rich colors, while the 144Hz refresh rate, VRR support, and quick 1ms response time ensure flawless performance. However, it’s missing some features and has a tilt-only stand,

If your budget were any lower, you’d be condemned to TN models with washed-out colors and narrow viewing angles – or to dark smearing of VA panels.

Nowadays, there are so many affordable yet exceptionally fast 1080p 144Hz IPS gaming monitors to choose from, it’s hard to pick one!

In this review, we’ll see what makes the HP X24i great and how it differentiates from the other popular models.

Further, thanks to the wide viewing angles of IPS technology, there are no prominent shifts in brightness, contrast, gamma, or color regardless of the angle you’re looking at the screen.

With a peak brightness of 350-nits, the HP X24i gets more than bright enough even in well-lit rooms, while the contrast ratio is mediocre at ~1,000:1, which is expected from IPS panel monitors.

In dark rooms, blacks may appear somewhat grayish in comparison to that of VA panels with a contrast ratio of ~3,000:1, but VA technology has other disadvantages, mainly contrast/gamma shifts and slower pixel response time (at least at this price range).

Another thing that can take away from the viewing experience in dark rooms is IPS glow, which is an expected drawback of this technology.

It’s characterized as visible ‘glowing’ around the corners of the screen that’s mostly visible when dark content is displayed in a dark room with a high brightness setting.

Properly adjusting the brightness or adding some ambient lighting can help alleviate the issue; Also note that IPS glow, just like other defects (backlight bleeding, dead/stuck pixels, etc.) varies across different units of monitors, but in most cases, it’s completely manageable or even negligible.

Moving on, the Full HD resolution results in a pixel density of 92 PPI (pixels per inch) on the 23.8″ viewable screen of the HP X24i. This translates to a decent amount of screen real estate and fairly sharp details and text.

The picture is noticeably clearer than that of a 27″ monitor with the same resolution and since 1080p is not very demanding on your CPU/GPU, it will allow you to maintain a high frame rate in games with decent graphics card.

Thanks to its 4ms low input lag, the HP X24i offers a responsive gaming experience without any delays.

The pixel response time speed is impressive as well! There are four overdrive modes, ranging from Level 1 to Level 4.

Level 3 and 4 are too aggressive and add a lot of pixel overshoot (inverse ghosting), so you shouldn’t pay any attention to them.

Level 2 is fast enough to prevent trailing behind fast-moving objects without adding any overshoot, which makes it the best overdrive setting at 144Hz.

This way, you always get a whole frame displayed, which prevents screen tearing and stuttering without adding any noticeable input lag.

The supported VRR range is 48-144Hz, but LFC (Low Framerate Compensation) is supported below 48FPS as the frame rate gets multiplied to keep tearing at bay (47FPS = 94Hz, etc.).

While the HP X24i is not officially certified as ‘G-SYNC Compatible’ by NVIDIA, VRR works without any issues with compatible GeForce cards (GTX 10-series or newer).

When using VRR, some overshoot will be visible at lower frame rates (~60FPS) with the Level 2 overdrive mode, so you might want to dial it back to Level 1 in case it becomes bothersome.

There are four hotkeys for OSD (On-Screen Display) menu navigation placed beneath the bottom bezel at the right side of the monitor.

The menu is well-organized, though we’d prefer a directional joystick for easier navigation through the settings.

Sadly, there are no gamma presets, 6-axis hue/saturation settings, or some type of a Black Equalizer feature that could be used to improve visibility in darker scenes of games – but you can do this manually by adjusting the gamma in video game/GPU settings.

The HP X24i display doesn’t use PWM (Pulse-Width Modulation) to regulate brightness and it’s completely flicker-free, so those sensitive to flickering won’t have to worry about getting headaches from prolonged use of the screen.

The stand of the monitor is tilt-only (-7°/22°), but it’s detachable allowing for easy mounting of the screen via the 100x100mm VESA pattern.

Further, the screen has ultra-thin bezels at the sides and the top, making it a good option for multi-monitor setups. There’s also a matte anti-glare screen coating that prevents reflections without making the image grainy.

Connectivity options include DisplayPort 1.2, HDMI 2.0, and a headphone jack. Both display inputs support FreeSync and 144Hz at 1920×1080.

The monitor is also available with an ergonomic stand (tilt, height, and 90° clockwise pivot adjustments) for ~$20 extra, the HP X24ih.

However, similar models, such as the LG 24GN650 and AOC 24G2 with additional features and ergonomic stands can often be found on sale for below $200.

It’s missing some non-essential gaming features and has a plain design, which might repulse some gamers, but attract others, depending on personal preference.