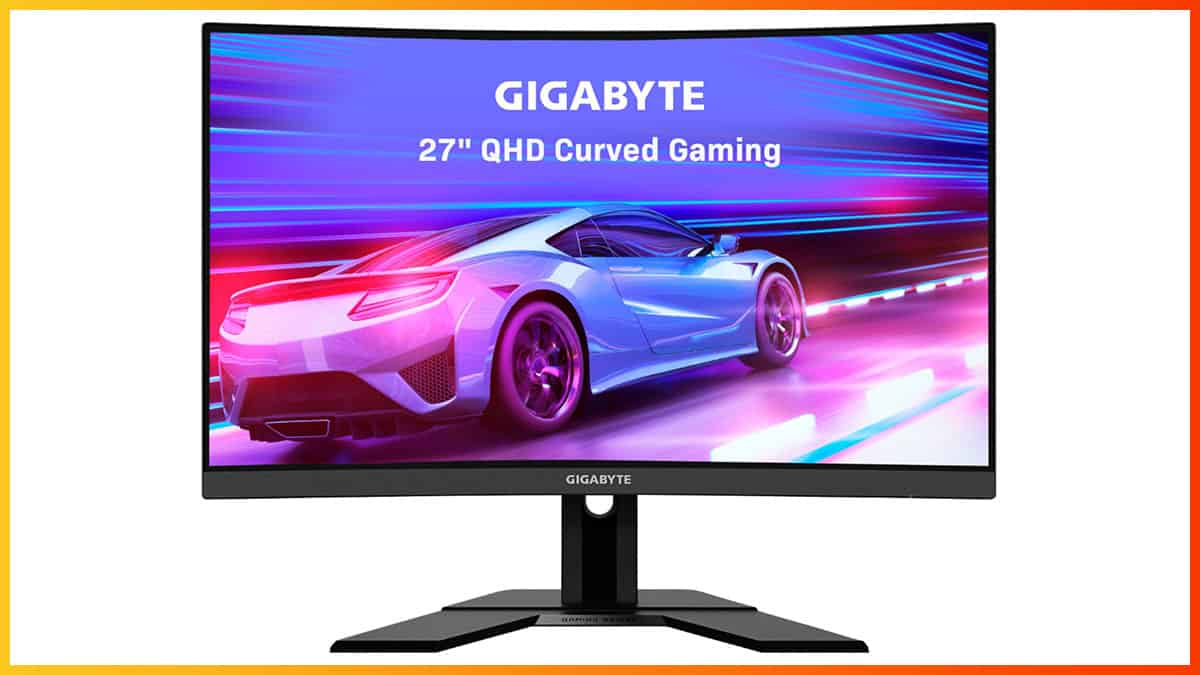 The Gigabyte G27QC is a reasonably priced 27″ 1440p 165Hz curved gaming monitor with FreeSync, Motion Blur Reduction, and plenty of extra features including a height-adjustable stand and a USB hub.

Due to its VA panel with a slow response time speed, it’s not recommended for competitive FPS gamers, but everyone else will definitely appreciate its high contrast ratio, vibrant colors, and crisp details.

The G27QC is Gigabyte’s another addition to its non-Aorus branded budget series of gaming monitors, offering compelling specifications at competitive pricing.

There’s a lot of competition when it comes to affordable 1440p 144Hz curved models though, so, in this review, we’ll see how exactly the Gigabyte G27QC compares to similarly priced alternatives, and if it’s the right display for you.

To start with, the 1440p Quad HD resolution provides you with a rich pixel density of roughly 108 PPI (pixels per inch). This means that you get plenty of screen space as well as sharp details, without any scaling necessary.

Keep in mind that 2560×1440 is considerably more demanding than 1920×1080, so make sure your PC system will be able to handle it, especially if you want to take advantage of the monitor’s high refresh rate.

Next, the strongest asset of VA panels is the high contrast ratio which results in deep inky blacks, bright whites, and a punchy relation between the darkest and the brightest tones.

In fact, blacks on IPS and TN panel displays, which have a contrast ratio of mere 1,000:1, look grayish in comparison!

The peak brightness of 250-nits is the lowest by today’s standards, but the monitor can get more than bright enough under normal viewing conditions.

If you want to use the display in a very bright room without any curtains or blinds though, you might find it a bit dim even at maximum brightness.

Moving on, the Gigabyte G27QC monitor has a wide color gamut backlight covering 92% of the DCI-P3 color space, which is equivalent to ~120% sRGB. As a result, you get more saturated and vibrant colors, particularly reds and greens.

Some users might not prefer the wide color gamut as it can make sRGB content appear over-saturated.

In this case, you can use the provided sRGB mode to restrict the color output to ~100% sRGB, though just how well this mode is calibrated will vary across different units of the monitor.

Lastly, note that the Gigabyte G27QC supports HDR (High Dynamic Range), but due to its low brightness and lack of local dimming, HDR content won’t really look any better.

Some minor shifts in brightness and contrast are expected when looking at the screen from sharp angles, but in real use, this won’t be an issue. You can even comfortably watch the monitor from a distance, i.e. in your bed.

Gamma shifts, on the other hand, are present when viewing the monitor directly, as it’s the case with all VA panel displays, but this won’t be a problem from regular use. It’s one of the reasons why professionals prefer IPS displays for color-accurate work though.

Now, the Gigabyte G27QC has a factory-overclocked 165Hz refresh rate, which is supported over DisplayPort, while the HDMI ports are limited to 144Hz. In truth, there’s no visible difference between 144Hz and 165Hz.

The difference in motion clarity in comparison to the standard 60Hz displays is night and day, and if you haven’t upgraded to a high refresh rate display yet, you’re going to love it – especially if you play fast-paced and competitive games.

The input lag of the monitor amounts to only ~4ms which makes for imperceptible delay between your actions and the result on the screen.

When it comes to pixel response time, which is the time pixels take to change from one color to another, it’s a different story.

Picture Quality is essentially disabled overdrive which is too slow even for 60Hz. Balanced works best up to 120Hz while the Speed mode is only good for higher refresh rates (144Hz+).

So, if you’re using the monitor at a fixed 144Hz or 165Hz refresh rate, you should use the Speed mode as it eliminates most of ghosting at a cost of some picture overshoot (inverse ghosting).

In case you’re using a variable refresh rate (VRR) and your frame rate is often below 144FPS, stick with the Balance option as Speed introduces too much overshoot at lower refresh rates.

Unfortunately, some ghosting will always be visible in fast-paced games, particularly in darker scenes, which is common for VA panel displays.

If you’re mostly playing competitive FPS games, we recommend going with a faster IPS monitor instead, such as the LG 27GL83A.

The Gigabyte specifies a 1ms response time speed for the G27QC, but this refers to the MPRT measure which you can only get by enabling the Aim Stabilizer technology in the OSD (On-Screen Display) menu of the monitor.

Aim Stabilizer is a Motion Blur Reduction technology that uses backlight strobing to reduce perceived trailing behind fast-moving objects. It makes fast-paced motion appear clearer, but it sacrifices picture brightness in the process.

Additionally, you cannot use Aim Stabilizer and VRR at the same time. For the best results with backlight strobing, your FPS (Frames Per Second) rate should match your refresh rate; otherwise, you’ll get the double-image effect.

Alternatively, you can enable FreeSync which provides you with a variable refresh rate that removes screen tearing and stuttering with no noticeable input lag penalty up to 165Hz/FPS.

Although the monitor is not certified as G-SYNC Compatible by NVIDIA, you can use FreeSync with compatible NVIDIA cards (GTX 10-series or newer) over DisplayPort, too.

While we didn’t have any issues when using FreeSync with an NVIDIA card, Samsung’s VA panels are prone to brightness flickering on some units.

Related:What Is FreeSync Brightness Flickering And Can You Fix It?

Using the Dashboard feature, you can display useful system parameters (such as CPU and GPU temperature, utilization, fan speed, etc) on the screen. You’ll just need to connect the USB-A to USB-B cable from the monitor to your PC.

Finally, the backlight of the monitor is flicker-free and there’s an integrated low-blue light filter.

The design of the monitor is simple, without any RGB lighting or flashy colors. It’s sturdy and offers height adjustment up to 130mm as well as -5°/20° tilt and 100x100mm VESA mount compatibility.

Unlike the Aorus branded models, the G27QC doesn’t have a noise cancelling headphone jack.

For navigation through the OSD menu, there’s a directional joystick which is a welcome change to hotkeys which are usually found on budget displays.

The screen has a matte anti-glare coating which eliminates reflections and doesn’t make the picture appear grainy while the 1500R curvature adds a bit depth to the picture, but it’s not particularly noticeable.

There’s a newer model, the Gigabyte G27QC-A, with a higher specified contrast ratio of 4,000:1. It’s unclear whether the monitors use different panels or the same panel and Gigabyte just approximated the contrast ratio differently.

Either way, keep in mind that what applies to the G27QC in this review may not be true for the G27QCA model. It might have a bit higher contrast ratio, but its response time speed might be even slower.

If you’re just looking for a cheap 27″ 1440p 144Hz gaming monitor, we recommend the AOC CQ27G2 which can be found for $250 and offers similar image quality, performance and features as the G27QC.

Both the G27QC and G27QCA are available as 32″ sized variants, the Gigabyte G32QCA and G32QC – but these use the same (or a very similar) panel as they have nearly identical specifications.

Unlike Gigabyte’s Aorus gaming monitors which tend to be overpriced, the regular models offer much better value for the price. Although the G27QC display has a lot of competition, it does offer some unique features which might appeal to some gamers.

However, if you’re sensitive to ghosting or screen tearing, we recommend going with an IPS monitor instead.