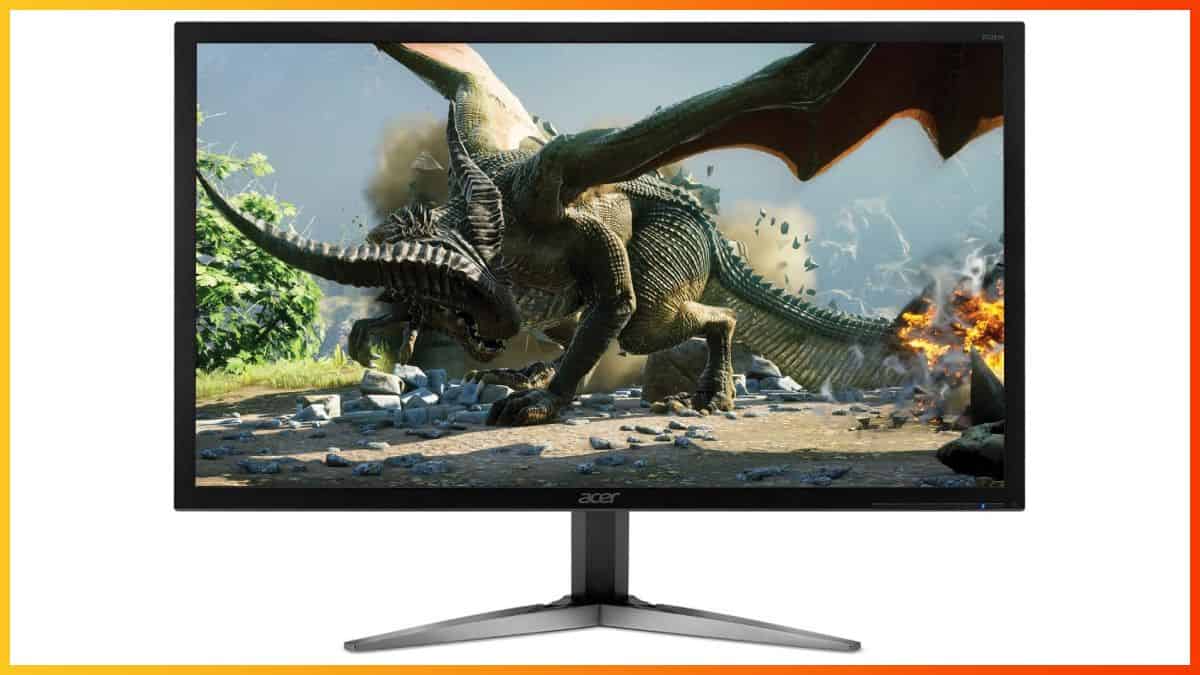 The Acer KG281K is a good 4K FreeSync monitor for competitive console gaming. It delivers a smooth performance and a solid picture quality, but there are better alternatives out there at this price range.

The Acer KG281K is a cheap 4K monitor that’s particularly good for the Xbox One S and the Xbox One X thanks to its FreeSync support over HDMI. Here’s everything you should know about this gaming monitor.

However, when it comes to color quality and viewing angles, it falls behind other panel technologies, including IPS and VA.

With TN panels, you get worse colors than what you’d get with IPS, as well as a lower contrast ratio in comparison to VA panels. On the other hand, you get the quickest response time speed for virtually zero ghosting and motion blur in fast-paced games.

Other panel-related specs include a 330-nit peak brightness, a 1,000:1 contrast ratio, and a 60Hz refresh rate, which is all standard for a 4K monitor at this price.

When it comes to 4K PC gaming, you’re going to need quite a powerful system to smoothly run 4K at ~60FPS with decent settings in newer video games, which is why we recommend 1440p 144Hz gaming monitors for PC gaming instead.

Now, if you have the PS4 Pro, you’re limited to 60Hz at 4K UHD, so a lower resolution display is out of the question regardless of its refresh rate.

While the ASUS KG281K does have a fast 1ms pixel response time speed, you can get a 4K IPS display at this price range, too.

Although IPS models have a response time of ~4ms, they are still quick enough to eliminate most of ghosting and motion blur in fast-paced games.

In fact, most casual gamers wouldn’t be able to tell the difference between the response time of IPS and TN, but they would certainly notice the difference in image quality as IPS panels offer a lot better colors as well as wide viewing angles.

So, unless you’re a really hardcore FPS gamer, we recommend just going with an IPS alternative such as the ASUS VG289Q.

In case you have the Xbox One S or the X1X, you have more options since Xbox One consoles also support 120Hz at 1080p and 1440p. So, for the best performance in competitive games, you should go with a cheaper 1080p 120Hz display.

If you want a more immersive image quality, the above-mentioned IPS model is the better option here as well. Or, you can get a 1440p 144Hz display for a good balance between image quality and responsiveness.

Visit our best PS4 Pro, and Xbox One X gaming monitors buyer’s guide for more information and the best deals.

Moving on, the monitor features a flicker-free backlight and a low-blue light filter, so you won’t have to worry about eye strain or headaches caused by prolonged use of the monitor.

There are six OSD (On-Screen Display) buttons at the bottom bezel at the right side of the monitor for powering on/off the monitor and navigating the OSD menu.

Five of those hotkeys can be used as shortcuts for certain functions such as entering the menu, changing the input source, adjusting the volume and brightness, etc.

Finally, the Acer KG281K 4K monitor supports AMD FreeSync with a 40-60Hz variable refresh rate range. By connecting a compatible graphics cards or an Xbox One/S/X console to the monitor, you get a dynamic refresh rate which eliminates screen tearing and stuttering for good within the 40-60FPS range.

Note that FreeSync works over both HDMI and DisplayPort, but once you enable it, the ‘Extreme’ overdrive preset is unavailable. Luckily, there’s no ghosting at the default overdrive setting, so this won’t be an issue.

Connectivity options of the Acer KG281K monitor include two HDMI 2.0 ports, DisplayPort 1.2, a headphones jack, and dual 2W integrated speakers. Moreover, the monitor is VESA mount compatible with a 100xmm pattern, but the stand of the monitor is tilt-only (-5°/15°).

The Acer KG281K price amounts to around $300. If you’re into competitive console gaming, you should also check out the ASUS VP28UQG and the BenQ EL2870U 4K monitors with 1ms GtG response time.

The Acer CB281HK is basically the same monitor as the KG281K, but with a fully ergonomic design and HDR10 (High Dynamic Range) support.

However, due to the monitor’s low color and contrast quality, HDR will just over-saturate or wash out the colors for compatible content. Moreover, it can’t run both HDR and FreeSync simultaneously.

Either way, we highly recommend getting the ASUS VG289Q instead.

While the Acer KG281K monitor is an overall decent gaming monitor, there are better and cheaper alternatives available.