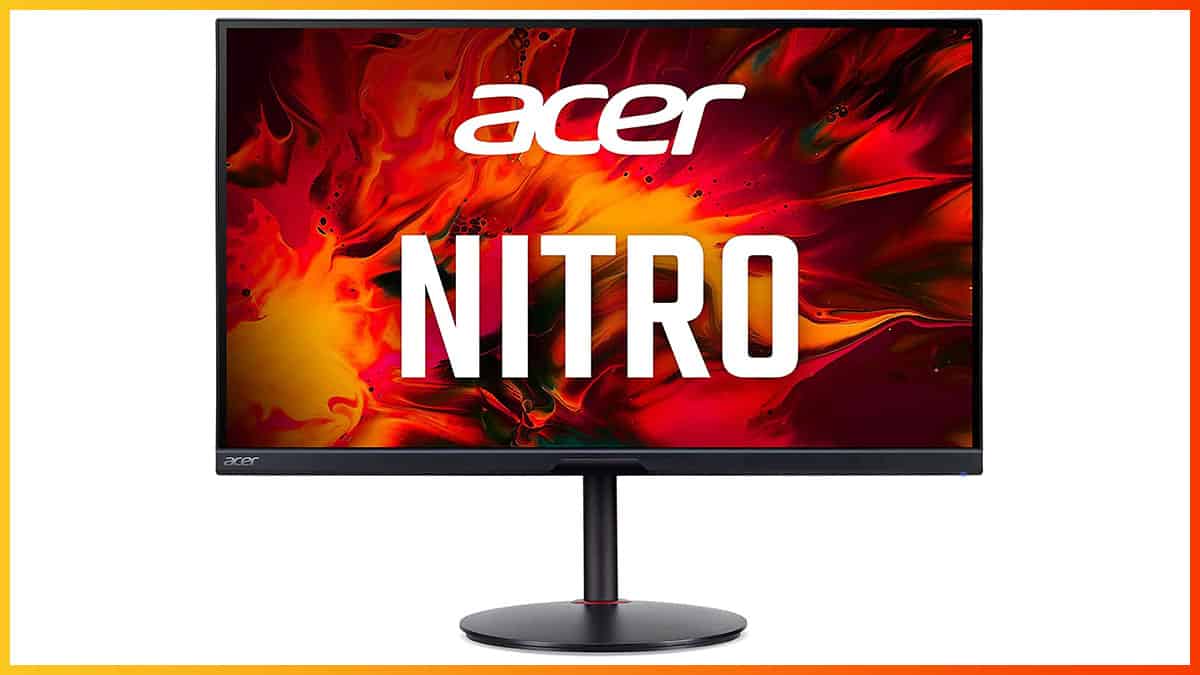 The Acer XV282K KV offers an immersive image quality thanks to its 4K UHD resolution and vibrant colors, while its quick response time and VRR support up to 144Hz ensure smooth gameplay performance.

The inclusion of HDMI 2.1 allows you to enjoy these perks on the PS5 and Xbox Series X as well as on PC.
However, there’s some minor to moderate overshoot noticeable at low FPS with VRR enabled and the HDR image is subpar for this price.

The Acer XV282K KV was one of the first high refresh rate 4K gaming monitors to feature HDMI 2.1 connectivity – allowing the PS5 and the Xbox Series X/S consoles to utilize 4K 120Hz.

The Acer Nitro XV282KKV is based on the M280DCA-E7B IPS panel by Innolux. This new panel features decreased emission of the harmful low-blue light even when not using the dedicated low-blue light picture mode.

The blue light peak wavelengths are shifted from 450nm to 460nm; so, you get less harmful blue lights without compromising color accuracy. The XV282K KV, therefore, has the new Eyesafe certification by TÜV Rheinland.

Other panel-related specifications include the common IPS qualities, such as the 178° wide viewing angles as well as accurate, consistent, and rich color reproduction with a wide 90% DCI-P3 gamut coverage.

The monitor is also factory-calibrated and features an sRGB emulation mode with adjustable brightness should you want to restrict its native ~120% sRGB gamut to ~100%.

In fact, there are several color modes available under the ‘Color Space’ setting in the OSD (On-Screen Display) menu, including sRGB, Rec.709, HDR, DCI, EBU, and SMPTE-C.

Dithered 10-bit color depth is supported (8-bit + 2-bit FRC) for 1.07 billion colors, with 12-bit also being an option over HDMI 2.1 through the use of additional dithering.

The contrast ratio amounts to 1,000:1 as expected from IPS technology, while the peak brightness goes up to 400-nits for HDR content and 300-nits for SDR. To unlock the monitor’s maximum brightness capability, set the ‘Max Brightness’ option to ‘On’ – otherwise, you’ll be limited to ~150-nits.

Even though the monitor has VESA’s entry-level DisplayHDR 400 certification, it has an 8-zone local dimming solution, which can improve the HDR viewing experience in some scenes.

Either way, HDR is not the main selling point of the Acer XV282K KV. Some scenes will look better, some will look pretty much the same, so you can think of it as a bonus feature; don’t expect a particularly meaningful HDR viewing experience.

The Acer XV282K KV monitor has low input lag of just ~4ms, so you won’t be able to notice or feel any delays.

There are three response time overdrive modes: Off, Normal, and Extreme.

The ‘Extreme’ mode has too much inverse ghosting as it pushes the pixels to change too fast thus causing overshoot, whereas the ‘Off’ and ‘Normal’ modes perform the same.

At 120Hz and 144Hz, there’s no noticeable ghosting or overshoot when using either Off or Normal overdrive mode.

However, if you are using a variable refresh rate (VRR), such as AMD’s FreeSync Premium, NVIDIA’s G-SYNC Compatible, or HDMI 2.1 VRR, and your frame rate is around 60FPS (which dynamically changes the refresh rate to 60Hz to prevent tearing), some overshoot will be noticeable.

This is a bit disappointing considering that many games will run at ~60FPS due to how demanding the 4K UHD resolution is. So, at low frame rates, you’ll have to choose between getting some inverse ghosting – or some screen tearing (with VRR disabled).

The amount of visible overshoot will vary on the scene and game, but in most cases, it’s tolerable or negligible, depending on your sensitivity to it.

While the monitor is not officially certified as G-SYNC Compatible by NVIDIA, VRR works without any issues with both compatible AMD and NVIDIA cards within the supported 48-144Hz range.

When using VRR via HDMI 2.1 (either with PS5 or compatible NVIDIA/GPU), you can actually change the overdrive setting, but since there’s no difference between Off and Normal, it’s pointless. To unlock the HDMI 2.1 capabilities, make sure to set ‘HDMI 2.1’ to ‘On’ in the OSD menu as it’s disabled by default.

The 4K UHD resolution results in a high pixel density of 157 PPI (pixels per inch) on the 28″ screen of the Acer XV282K KV. You get plenty of screen space as well as crystal-clear details and text!

Some IPS glow and backlight bleeding was noticeable, but nothing too extreme. This also varies across different units of monitors, so your mileage may vary.

The Acer Nitro XV282K KV HDMI 2.1 monitor also supports Motion Blur Reduction via the Visual Response Boost (VRB) feature that uses backlight strobing in order to reduce the perceived motion blur. It can only be activated at a fixed 120Hz or 144Hz refresh rate – and it reduces the maximum brightness while active.

There are two modes (Normal and Extreme) with different brightness settings; Extreme makes the image darker, but fast-paced motion is clearer.

At the rear of the monitor, there’s a power button, three hotkeys (can be assigned to different shortcuts), and a directional joystick for navigation through the OSD menu.

The Acer XV282K KV also has an integrated sensor that can automatically adjust brightness (LightSense) and color temperature (ColorSense) according to ambient lighting. It can also automatically dim the screen or make the monitor go into the power saving mode if it detects that there’s nobody in front of screen (ProxiSense).

The backlight of the monitor is flicker-free, which in addition to the Eyesafe certification and four low-blue light filter modes ensures a comfortable viewing experience even after prolonged use (unless VRB is enabled).

The screen has a light matte anti-glare coating that prevents reflections without making the picture too grainy.

The newer Acer Predator XB283K KV goes for just $600 yet it has the same image quality, performance and features as the XV282K KV. It even has a better overdrive implementation with no overshoot at low FPS.

The Acer XV282K KV is an overall excellent gaming monitor with vibrant colors, crisp details and smooth performance – apart from some overshot at lower FPS with VRR enabled. However, the newer XB283K model is much better and cheaper.