Choosing between a 120Hz and a 60Hz TV mostly depends on what type of content you are watching. 120Hz TVs can be better for watching sports, playing video games, and watching native 24FPS content. Most of the new TVs are 120Hz anyway, so there are other more important things to take into consideration such as the panel type, response time speed, input lag, etc.

Wondering whether you should get a 120Hz TV and is it worth the upgrade from 60Hz?

Well, most of the modern TVs released nowadays are 120Hz, so you won’t have much of a choice if you want a brand new TV.

Unlike the other specifications related to new TVs such as 4K Ultra HD resolution, HDR, and OLED technology, switching over to a new TV solely because it’s 120Hz isn’t worthwhile for most people.

In this article, we’ll go into details about what exactly a 120Hz TV offers as opposed to the standard 60Hz TV, after which you can decide for yourself whether the upgrade is worth it. 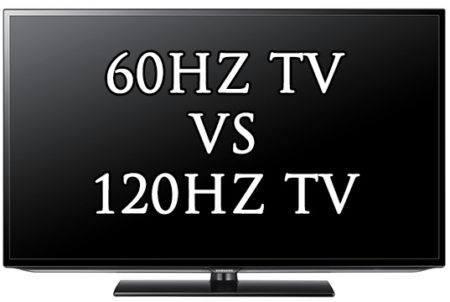 First of all, you should know that the refresh rate of a TV differs than that of a monitor. For instance, a 120Hz monitor can display 120 unique frames per second (FPS) whereas a 120Hz TV displays up to 60 FPS and simulates the rest of the frames by motion smoothing or black frame insertion (BFI).

So, if you are watching 30 FPS or 60 FPS content on your 120Hz TV, the image won’t be different than it would be on a 60Hz TV. And since that makes for the majority of content, many find 120Hz unnecessary for TVs.

An exception to this would be watching native 24 FPS content from a media source such as Blu-ray.

Because the content feeds the display 24 frames per second, a 60Hz TV has to alternate between adding 3 and 2 frames in-between those 24 FPS in order to produce the picture. This method is referred to as ‘3:2 pulldown‘ and can introduce slight judder in certain scenes though many don’t notice it all.

A 120Hz TV, on the other hand, adds 5 frames in-between those 24 frames per second i.e. 5:5 pulldown which offers a smoother viewing experience since the number of frames added is always the same. 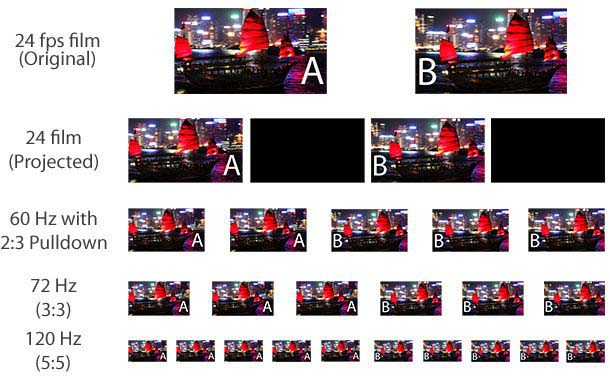 When watching sports and other fast-paced content such as console games, some TVs can use framerate interpolation or black frame insertion (depending on the TV model) to increase motion clarity.

These extra frames are based on the previous and the succeeding frame which helps reduce motion blur.

Similarly, TVs with BFI insert black frames instead of the simulated frames that reduce motion blur more effectively but introduce screen flicker which some are sensitive to. The flickering will be less apparent on a 120Hz TV, though. 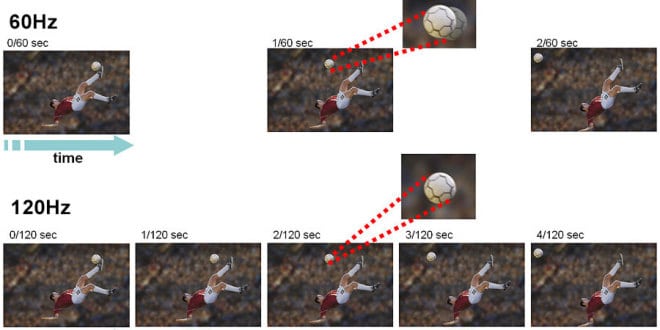 In the end, it all comes down to personal preference.

Some people will turn off any kind of frame interpolation or insertion even while playing games or watching sports while others will swear by it.

Either way, other TV panel related specifications such as screen resolution, contrast ratio, and panel type will have more impact on the image quality while TV’s response time and input lag is more important for gaming.