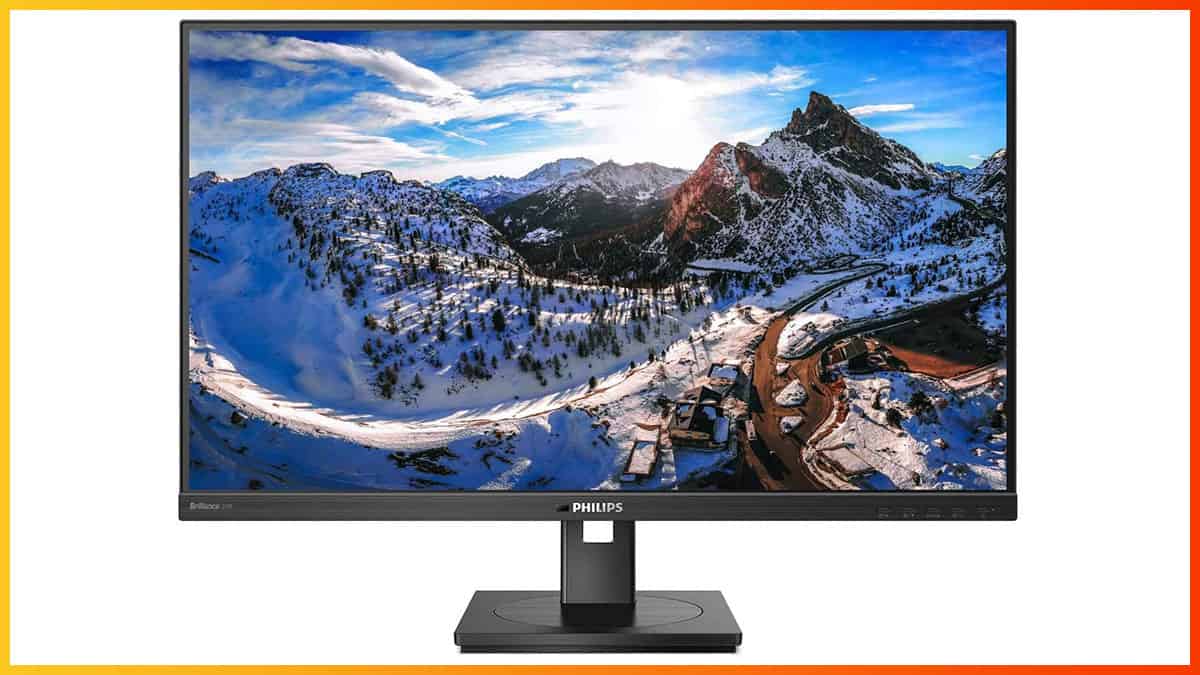 The Philips 279P1 is one of the best value 4K monitors with a USB-C input supporting substantial power delivery and DisplayPort Alternate Mode.

On top of that, it offers an IPS panel with vibrant colors and plenty of features, including integrated light sensors, an ergonomic stand, and rich connectivity options.

The Philips Brilliance 279P1 is one of the most affordable 27″ 4K IPS monitors with a USB type C port that has enough power delivery to charge a laptop (90W) and transfer 4K video signal, audio, and data simultaneously – via just one USB-C cable!

Even though the main selling-point of the Philips 279P1 monitor is the full-featured USB-C connectivity, it’s actually quite a decent 4K monitor for the price.

With a 4K UHD resolution, you get a high pixel density of 163 PPI (pixels per inch) on the 27″ viewable screen of the monitor. As a result, you get plenty of screen real estate, as well as sharp details and text.

Such high pixel density will make some small items appear tiny, so you will need to apply some scaling. This will reduce the amount of screen space, but further improve detail clarity.

Moving on, the monitor has a peak brightness of 350-nits, which is plenty under normal lighting conditions and good enough for particularly bright rooms.

The static contrast ratio amounts to 1,000:1; this is standard for IPS panel monitors and while you won’t get as deep blacks as that of VA panel displays (with 3,000:1 contrast ratio), you do get wider viewing angles and more consistent colors.

Thanks to its IPS panel, the image quality of the Philips 279P1 won’t degrade at an angle and you get accurate and consistent colors across the entire screen, at all times, which in addition to the Delta E < 2 factory calibration makes the monitor fit for color-critical work.

The monitor has a wide ~122% sRGB color gamut, resulting in more saturated and vivid colors, but you can clamp the gamut to ~100% sRGB by using the sRGB mode under color temperature settings in the OSD (On-Screen Display) menu.

10-bit color depth is supported via dithering for 1.07 billion colors and less banding.

As an IPS panel monitor, the Philips 279P1 has some IPS glow visible, but it’s not noticeable under normal usage, though this varies across different units of monitors.

Due to its low 60Hz refresh rate and lack of variable refresh rate technology, the monitor won’t particularly interest gamers.

Still, thanks to the monitor’s 4K resolution and vibrant colors provided by the IPS panel, video games will look great, provided that you can push a decent frame rate.

With a 4ms (GtG) pixel response time speed, there won’t be any prominent trailing visible behind fast-moving objects, while the input lag of ~10ms results in imperceptible delay at 60Hz.

There are four response time overdrive modes available under the SmartResponse setting: Off, Fast, Faster, and Fastest. Since the ‘Fastest’ mode adds overshoot, you should use the ‘Faster’ preset.

FreeSync is not supported, meaning that you will get screen tearing unless you enable V-Sync – in this case, we recommend using the V-Sync trick to minimize the added input latency.

The backlight of the monitor is flicker-free and there’s an integrated low-blue light filter. These two features can prevent eye strain/fatigue and headaches caused by prolonged use of the screen.

Further, there’s a built-in sensor that can automatically adjust the screen’s brightness according to ambient lighting via the LightSensor feature.

You’ll also find the PowerSensor feature, which will reduce the monitor’s brightness when it detects that nobody is in front of the screen.

For navigation through the OSD menu, there are four hotkeys next to the power button at the bottom bezel of the screen, at the right side.

SmartUniformity can improve brightness and color uniformity at a cost of contrast ratio.

Moreover, the screen has a 25% low-haze anti-glare coating that prevents reflections, but doesn’t make the picture appear grainy.

You also get two downstream USB 3.0 ports at the back, two more at the side (one with fast-charging), an upstream USB-B port, a headphone jack, an Ethernet port and dual 3W integrated speakers.

The Philips 279P1 goes for ~$360, which makes it one of the cheapest 4K monitors with a USB-C port that supports substantial power delivery.

You should also check out the Samsung S27A800U with basically identical image quality and performance as well as similar features. On sale, it can be found for around $300.

Looking for a USB-C monitor with a different screen resolution or a higher refresh rate? Visit our comprehensive and always up-to date best USB-C monitor buyer’s guide for more information!

All in all, if you have a laptop that supports USB-C PD and DP Alt Mode, and want a clutter-free setup, the Philips 279P1 allows you to enjoy a gorgeous image quality, smooth performance, and plethora of additional useful features at an affordable price!