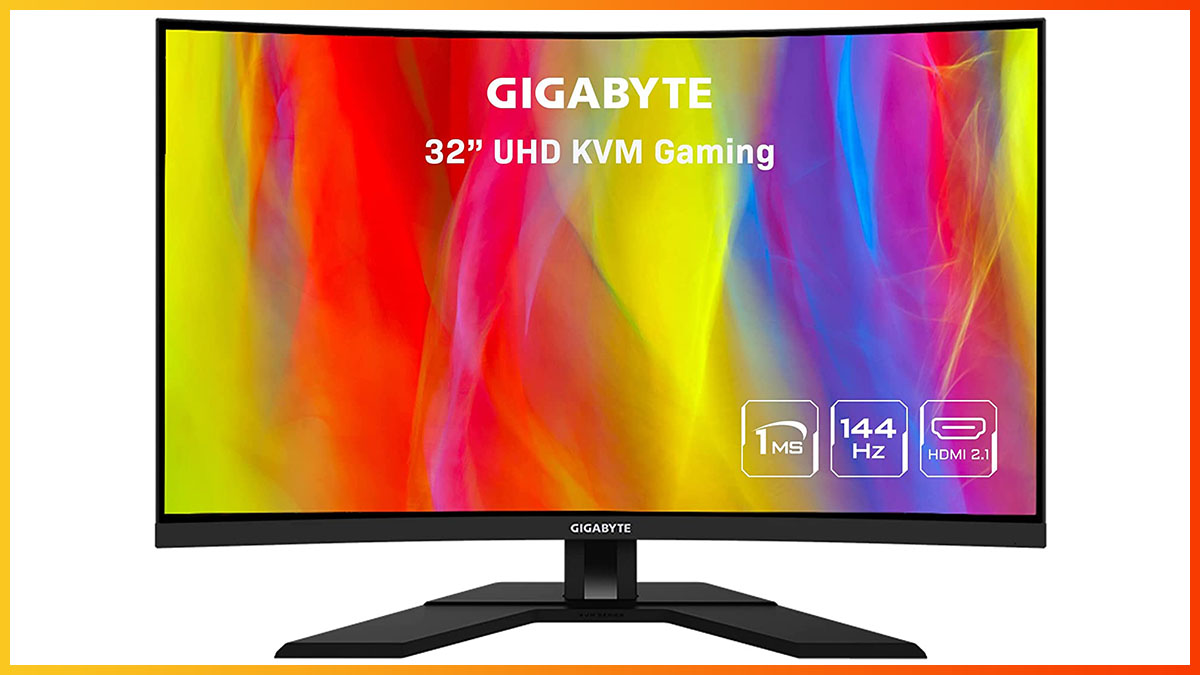 The Gigabyte M32UC is a 32″ 4K 144Hz gaming monitor with HDMI 2.1 and a curved VA panel. If you’re not particularly sensitive to ghosting, it’s a great cheaper alternative to the IPS variants thanks to its higher contrast ratio and lack of IPS glow.

The Gigabyte M32UC is one of the first 32″ 4K high refresh rate gaming monitors with a VA panel! Let’s see what it has to offer.

Thanks to its VA panel, the Gigabyte M32UC provides you with a high static contrast ratio of 3,000:1, resulting in deep blacks and bright whites. It has a specified peak brightness of 350-nits (400-nits for HDR), but it can actually reach around 500-nits, making for a very bright image even in well-lit rooms.

Further, the monitor has a wide color gamut with 93% coverage of the DCI-P3 color space. As a result, you get vibrant and saturated colors with the option to clamp the native gamut (~125% sRGB) down to ~100% sRGB via the provided sRGB emulation mode in case you prefer more accurate colors when viewing SDR content.

Since the over-saturation is rather minor, we find that most people will prefer the extra color vibrancy provided by the wider gamut, in which case we recommend sticking with the ‘Custom’ picture preset instead of ‘sRGB.’

Unlike IPS monitors, VA panels don’t suffer from IPS glow, which in addition to the higher contrast ratio makes for a more immersive viewing experience in a dark room.

There’s some VA glow and backlight bleeding, but the intensity of these visual artifacts varies from unit to unit. In most cases though, they’re manageable.

The viewing angles aren’t quite as wide as that of IPS technology since there are minor shifts in gamma at certain viewing angles, but unless you’re doing professional color-critical work, this won’t be an issue.

You can even do some basic content creation without worrying that your work will look too different on other displays. For any serious work, you’ll need a colorimeter and preferably an IPS panel display.

The 4K UHD resolution looks great even on the 31.5″ viewable screen of the Gigabyte M32UC with a pixel density of roughly 140 PPI (pixels per inch) – you get plenty of screen space with sharp details and text.

Some users prefer using 125% scaling in order to make small text easier to read, while others find that scaling isn’t necessary, so it’s up to your personal preference.

Keep in mind that 4K UHD is quite demanding to drive, so make sure you’ve got a good enough GPU/CPU to maintain the desired frame rate in your favorite games!

The Gigabyte M32UC monitor can also accept the HDR10 signal and has VESA’s entry-level DisplayHDR 400 certification, but due to the lack of proper HDR hardware (such as local dimming), most scenes will look better with HDR disabled.

Still, thanks to the monitor’s high native contrast ratio, decent peak brightness, wide color gamut, high resolution and dithered 10-bit color depth support for smoother gradients, some HDR scenes might look better, so it’s worth trying it out in some games with good HDR implementation.

The Off mode is too slow, while the Speed mode adds too much overshoot. For optimal performance, we recommend sticking with the Picture Quality mode as it’s most effective at eliminating ghosting at both high and low refresh rates without introducing any inverse ghosting.

While the Gigabyte M32UC has a decent pixel response time speed for a VA panel, it’s not as fast as Samsung’s Odyssey G7 and other fast 1ms GtG VA models.

In truth, a lot of users won’t be bothered by the amount of ghosting while gaming. It’s mostly noticeable while scrolling webpages with a black background and white font or in particularly dark scenes with fast-moving bright objects.

So, overall, it’s tolerable for casual gaming unless you’re particularly sensitive to it. For competitive gaming, you shouldn’t be using a 32″ 4K monitor anyway.

Input lag amounts to around 4ms, which makes for imperceptible delay between your actions and the result on the screen.

Variable refresh rate (VRR) is supported with a 48-144Hz dynamic range for tear-free gameplay. If you overclock the monitor to 160Hz, however, you cannot use VRR. Since the 16Hz difference isn’t noticeable, we don’t recommend overclocking.

The Gigabyte M32UC isn’t certified by NVIDIA as ‘G-SYNC Compatible’, but you can use VRR with compatible GeForce cards over DisplayPort.

Although our unit had no VRR brightness flickering usually associated with high refresh rate VA panels, other units might be affected by this with fluctuating frame rates, in in-game menus, and if your FPS is around the LFC threshold (~48FPS).

Additionally, the M32UC supports backlight strobing via the Aim Stabilizer Sync technology for smoother motion clarity at a cost of picture brightness. You can also use it at the same time as VRR as long as your refresh/frame rate is over 80Hz/FPS.

The backlight of the monitor is flicker-free (unless Aim Stabilizer/Sync is enabled) and there’s a built-in low-blue light filter.

At the back of the monitor, there’s a directional joystick for easy navigation through the OSD (On-Screen Display) menu. You can also use Gigabyte’s OSD Sidekick desktop application for quicker adjustments via keyboard and mouse.

In addition to the common image adjustment settings (brightness, contrast, color temperature, etc.), you’ll also get access to some of the advanced tools, including sharpness, gamma, 6-axis hue/saturation and Color Vibrance.

Input Auto Switch and Picture in Picture/Picture by Picture are supported too, and there’s an integrated KVM switch at the rear of the monitor.

Lastly, there’s the Dashboard feature that can display your system’s performance (CPU/GPU fan speed, utilization, frequency, etc.) on the screen; You’ll just need to connect the monitor to your PC via a USB cable.

The stand of the monitor is sturdy and offers height adjustment up to 100mm, tilt by -5°/20° and 100x100mm VESA mount compatibility.

The screen has a moderate 1500R curvature for added immersion and a light matte anti-glare coating against reflections, which doesn’t add too much graininess to the image.

While most people don’t prefer curved screens on 16:9 widescreen displays, the 1500R curvature isn’t as aggressive as the 1000R of some of Samsung’s panels, and since the monitor’s 32″ screen is quite large, the moderate curve complements it nicely.

For $730, you can find the Gigabyte M32U model with an IPS panel, sporting a faster response time speed, smoother VRR performance and wider viewing angles, but also a lower contrast ratio.

So, if you’re sensitive to screen tearing and ghosting, we recommend going with the IPS version.

In case you prefer a higher contrast ratio for deeper blacks and play more graphically-oriented games in a dark room, the M32UC model is for you.

Around this price range, you should also keep an eye on the upcoming mini LED monitors. Check out our comprehensive and always up-to-date best gaming monitor buyer’s guide for more information and the best deals available.

Overall, the Gigabyte M32UC is an excellent 32″ 4K 144Hz gaming monitor. Its curved VA panel has some downsides in comparison to the IPS variants, such as the slower response time, but it also has a few advantages, including a higher contrast ratio and a more affordable price.

So, if you don’t mind its flaws, the M32UC is a great monitor for both PC and console gaming, content consumption, basic content creation, office-related work and everyday use.