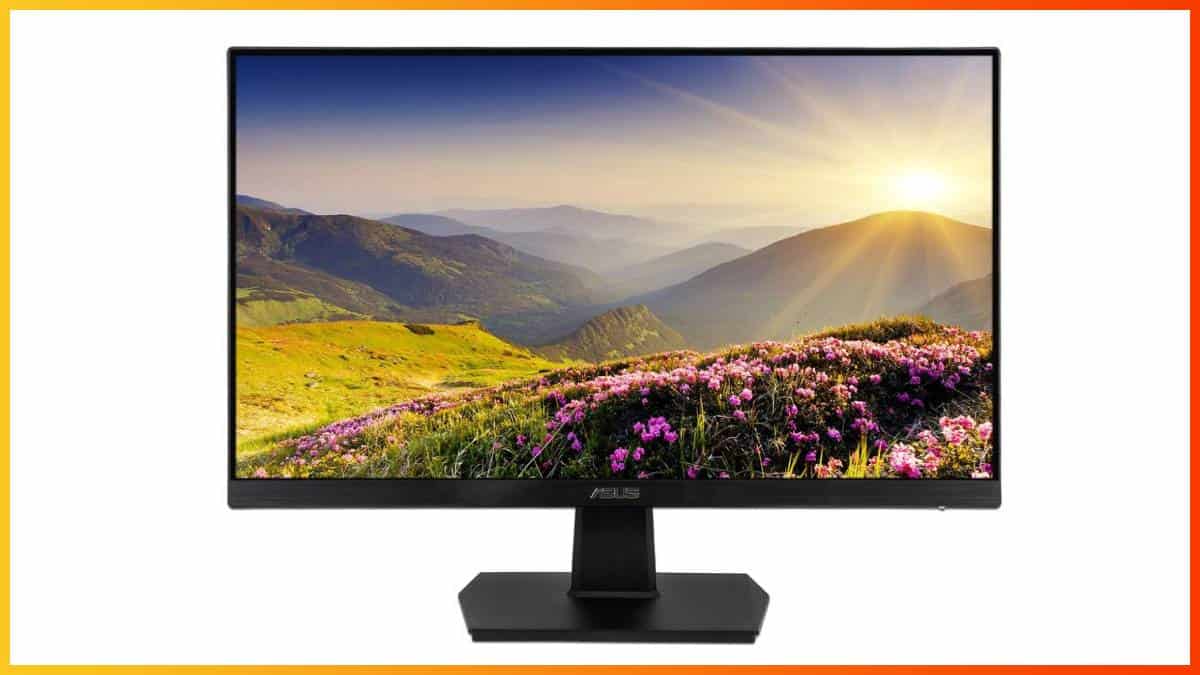 The ASUS VA24EHE is the ideal budget-friendly monitor for office, light gaming, and everyday use. It has a VESA-mount compatible stand and ultra-thin bezels while its 24″ 1080p IPS panel ensures wide viewing angles, vibrant colors, and sharp text!

Gamers also get a little boost to 75Hz and FreeSync over HDMI (for AMD GPU users).

The ASUS VA24EHE is an affordable 24″ 1080p IPS monitor with ultra-thin bezels and AMD FreeSync up to 75Hz.

While it’s an overall excellent budget monitor, there are a few similarly priced alternatives you should know about!

The monitor is based on an IPS panel with a 250-nit peak brightness, a 1,000:1 static contrast ratio, 178° viewing angles, 8-bit color depth support via dithering (6-bit + FRC), and the standard sRGB color gamut.

All of these specs are standard for an IPS monitor at this price range.

The 250-nit peak brightness might seem low for a modern desktop monitor, but the screen will be more than bright enough under normal viewing conditions; you’ll surely want to lower the maximum brightness.

Dithering is also a common method to get 8-bit color for 16.7 million colors on IPS panel monitors at this price range.

Don’t worry, the difference between true 8-bit and 6-bit + 2-bit FRC color is not perceptible.

Thanks to its IPS panel, the ASUS VA24EHE monitor offers accurate, consistent, and vivid colors. Further, thanks to the wide 178° viewing angles, the colors will stay perfect regardless of the angle you’re looking at the screen.

Now, VA panel monitors have a higher static contrast ratio of ~3,000:1. So, they’ll have much deeper blacks and more vivid details in shadows, but not as consistent colors or wide viewing angles as the IPS models.

VA monitors have other disadvantages at this price range as well, such as a slow pixel response time speed.

Nowadays, you won’t hear Full HD as often as 4K UHD, but it’s still considered as the standard resolution.

1080p content is most widespread, most PCs support it, and it looks very good on 24″ sized screens. You get a pixel density of ~92 PPI, which makes for a decent amount of screen space as well as sharp details and text.

The monitor has a pixel response time speed of 5ms GtG (gray to gray pixel transition), which is more than quick enough for its 75Hz refresh rate. There is no prominent ghosting behind fast-moving objects.

Of course, when it comes to gaming performance, the 75Hz refresh rate is holding back this display as there are now 144Hz models that are just slightly more expensive than the ASUS VA24EHE.

So, if you play a lot of games and your FPS (Frames Per Second) is usually over 75FPS, consider investing in a 144Hz gaming monitor (especially if your frame rate is often over 100FPS).

In case you rarely play games and/or your FPS doesn’t surpass 75FPS, the ASUS VA24EHE will do just fine. It has a low input lag of ~10ms, so you won’t notice or feel any delays.

VRR eliminates all screen tearing and stuttering with minimal input lag penalty (~1ms) as long as your frame rate is within the dynamic range (48-75FPS). Below 48FPS, FreeSync stops working until your FPS recovers.

You will need a compatible AMD graphics card for FreeSync.

Although ASUS’s webpage for this product claims that it supports FreeSync with NVIDIA graphics cards, that’s is not true as the monitor doesn’t have a DisplayPort input.

The backlight of the monitor is flicker-free, and there’s an integrated low-blue light filter. These two technologies prevent headaches and eye strain caused by prolonged use of the monitor.

One last thing to keep in mind about IPS monitors is IPS glow. This is a common drawback of this panel technology; it’s described as visible ‘glowing’ around the corners of the screen.

The intensity of IPS glow varies across different units of the monitor, and in all but the most extreme cases, it’s completely manageable.

If you get a lot of glowing, decrease the monitor’s maximum brightness or add some ambient lighting around the screen.

The OSD (On-Screen Display) menu of the ASUS VA24EHE display is well-organized and user-friendly. You can easily navigate through it via the four buttons at the back of the monitor (at the right side).

The ASUS VA24EHE is VESA mount compatible (100x100mm) and has ultra-thin bezels, which makes it ideal for multi-monitor setups. Other than that, the stand is sturdy, but you can only tilt the screen by -5°/23°.

Connectivity options include HDMI 1.4, VGA, and DVI-D. There are no audio jacks or integrated speakers.

There are two more variants of this monitor: The ASUS VA24EHL and the ASUS VA24EHLB, which have integrated speakers and audio jacks. The VA24EHLB model also has a dual-USB 3.0 hub.

The ASUS VA24EHE goes for around $110 – $130, which is a reasonable price considering its specifications and features.

However, you might want to consider investing a bit extra for one of the following monitors:

For gamers, we highly recommend investing in the AOC C24G1A (VA panel for deeper blacks) or the ASUS VP249QGR (faster IPS panel) depending on your panel preference.

For office and everyday use, simply pick one according to availability/pricing or your design/features preference.

If all you want is an affordable and reliable 24″ 1080p IPS monitor with ultra-thin bezels and VESA mount compatibility, the ASUS VA24EHE is a great monitor for the price!

For the gamers out there, the 75Hz refresh rate and FreeSync over HDMI are a nice little bonus, but we’d highly recommend saving a bit more for a 144Hz model.