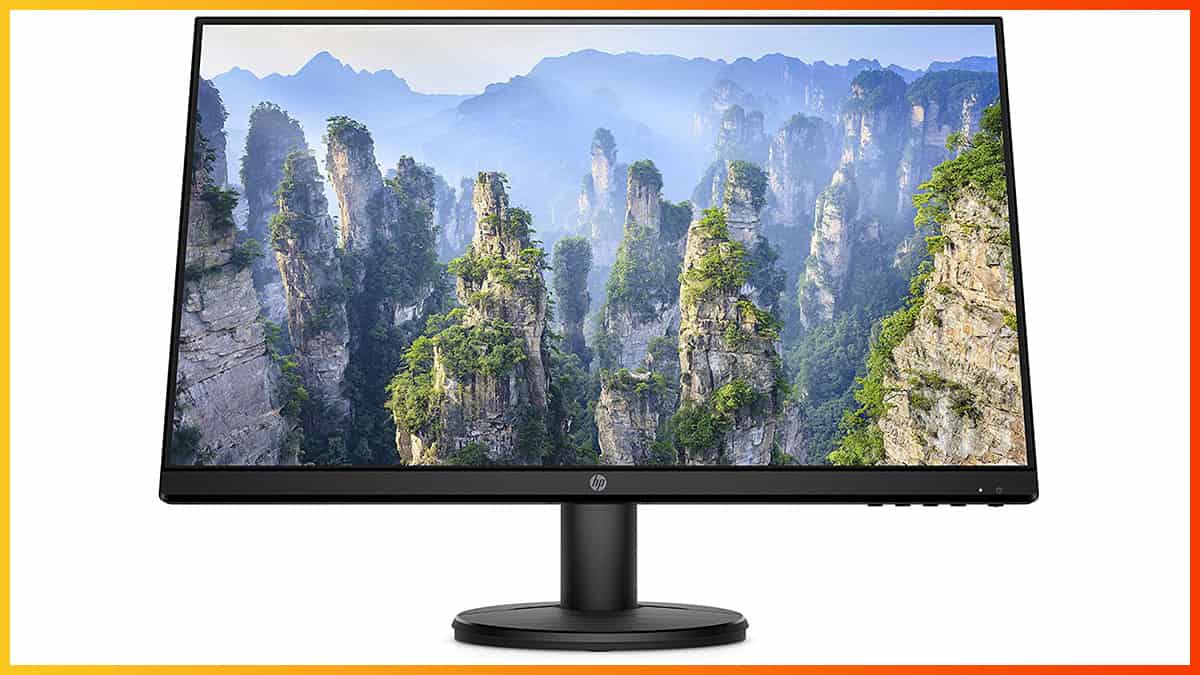 If you’re looking for an affordable 24″ IPS monitor for everyday/office use and light gaming, the HP V24i is a good choice for the money, as long as you don’t need an ergonomic stand or variable refresh rate; otherwise, there are alternatives worth considering too.

The HP V24i is an affordable 24″ monitor with an IPS panel that ensures wide viewing angles and consistent colors.

It also features a modern design with ultra-thin bezels and VESA mount compatibility.

As a result, you get a decent amount of screen real estate as well as moderately sharp details and text – nothing spectacular, but this is expected from a budget monitor.

It’s worth noting that the picture will be sharper than that of a 27″ 1080p monitor due to the pixel per inch ratio difference.

Further, the IPS panel of the monitor ensures that the image is flawless regardless of the angle you’re looking at the screen thanks to the 178° wide viewing angles.

The HP V24i has 72% NTSC color gamut coverage, which is equivalent to ~100% sRGB gamut size, so there’s some extension and some undercoverage of the sRGB color space.

In the end, you get around 95% sRGB color space coverage, which is expected and basically indistinguishable from 100% coverage unless you’re doing professional color-critical work.

Next, the monitor has a peak brightness of 250-nits. That’s more than bright enough under normal lighting conditions, so you’ll want to reduce the brightness setting down from the maximum.

If you plan on using the screen next to a big window without any curtains or blinders, the monitor might have trouble mitigating glare even at its highest brightness setting though, in which case you should look for a brighter monitor.

The contrast ratio amounts to 1,000:1, which is standard for all IPS panel monitors. Blacks aren’t quite as deep as that of VA monitors, but they’re acceptable. Some IPS glow is also present, but it’s manageable.

While not a gaming monitor, the HP V24i display offers a decent gaming experience thanks to its ~11ms low input lag at 60Hz that results in no perceptible delays between your actions and the result on the screen.

However, since the monitor doesn’t support a variable refresh rate technology (such as AMD FreeSync) or 75Hz, most gamers will not be interested in it; there are similarly priced 24″ 1080p IPS monitors that do offer these features (more about them later).

Moving on, the HP V24i has a flicker-free backlight meaning that those sensitive to screen flickering won’t have to worry about getting headaches from prolonged use of the monitor.

To access and navigate the monitor’s OSD (On-Screen Display) menu, there are four hotkeys next to the power button beneath the bottom bezel of the screen, at the right side.

A lot of manufacturers using this panel offer a 75Hz refresh rate, so you might want to try manually overclocking the monitor to 75Hz by creating a custom resolution, though your mileage may vary here.

The stand of the monitor is tilt-only, but you can detach it and mount the screen on a third-party stand via the 100x100mm VESA mount pattern.

The screen has a matte anti-glare coating that eliminates reflections, while the bezels are ultra-thin at the top and at the sides – ideal for multi-monitor setups.

Connectivity options include one VGA port and one HDMI 1.4 input. There’s no headphone jack, USB ports, or built-in speakers.

The HP V24i price is usually around $130, which is on par with other similar budget monitors.

If you play a lot of games, we recommend saving up for a 144Hz gaming monitor or getting the ASUS VA24DQ instead for the same price.

It has a DisplayPort input and FreeSync support up to 75Hz allowing you to use variable refresh rate up to 75FPS with both AMD and NVIDIA graphics cards.

Around this price range, you should also check out the HP 24mh. It offers an ergonomic stand, built-in speakers, and a DisplayPort input for a bit higher price, but just like the V24i, it lacks FreeSync.

Overall, the HP V24i is a great budget monitor and if you don’t need a headphone jack, an ergonomic stand, and FreeSync support up to 75Hz, it offers good value for money.