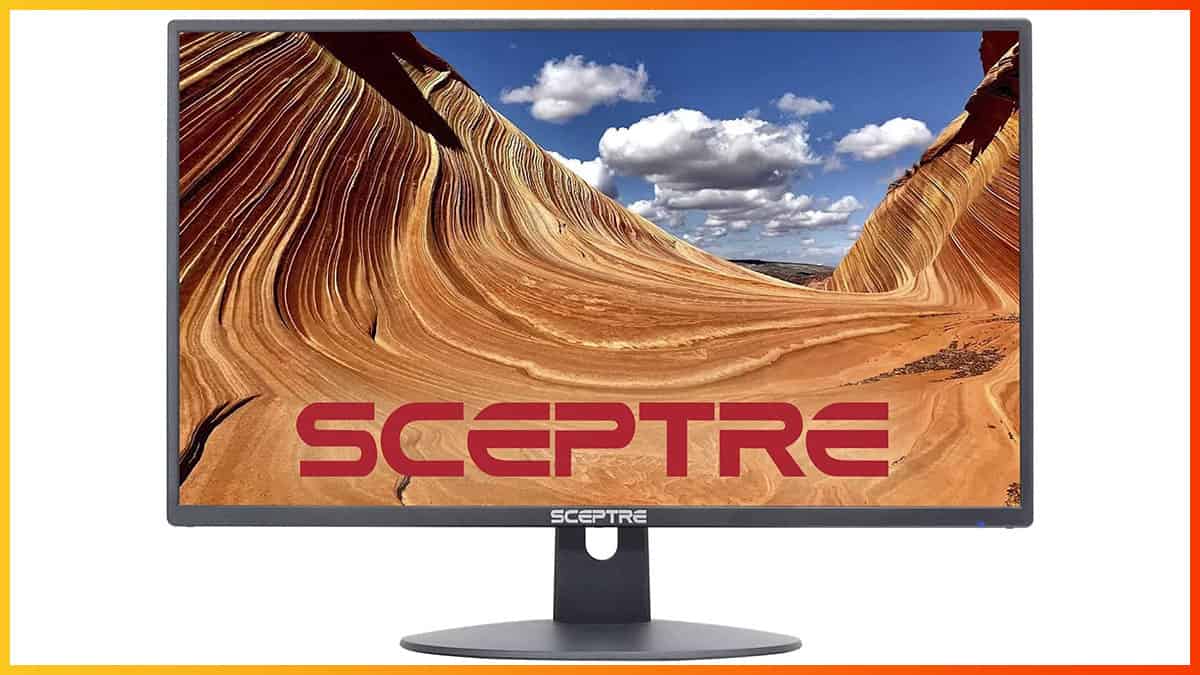 The Sceptre E248W-19203R is a decent budget 24″ 1080p monitor. Its VA panel offers a high contrast ratio for deep blacks, while FreeSync up to 75Hz offers tear-free gameplay if you have a compatible GPU.

Thanks to its VA (Vertical Alignment) panel, the Sceptre E248W-19203R boasts a high static contrast ratio of 3,000:1. As a result, you get deep and inky blacks, making for an immersive viewing experience, especially in dark rooms.

Further, it has a peak brightness of 250-nits, which is minimal as far as modern LED-backlit monitors go, but it can get more than bright enough under normal lighting conditions.

If you have a particularly bright room or you plan to place the monitor next to a window with no blinders/curtains, the screen might not be able to efficiently mitigate glare.

As far as color reproduction is concerned, the Sceptre E248W-19203R monitor covers 95% of the sRGB color space; sRGB is the standard and most widespread color space, so the majority of web content and games will be depicted accurately.

There is no noticeable difference between 95% and 100% sRGB gamut coverage, that is unless you’re doing professional color-critical work. However, VA monitors shouldn’t be used in this scenario in the first place due to their viewing angles.

While you get significantly wider viewing angles in comparison to TN panel monitors, there are still some gamma and saturation shifts present when watching the screen at an angle. For video games and multimedia consumption, it’s not an issue, but if you want professional-grade color accuracy at all times, you should get an IPS monitor.

It’s also worth noting that the Sceptre E248W-19203R uses temporal dithering to provide 16.7 million colors (6-bit + 2-bit FRC). This can sometimes cause a 30Hz flicker, but most users won’t be bothered by it as it’s very hard to notice unless deliberately looking for it in certain test patterns.

Moving on, the monitor has a Full HD screen resolution of 1920×1080 pixels. On its 23.8″ viewable screen, that results in a pixel density of 92.56 PPI (pixels per inch). You get a decent amount of screen real estate as well as fairly sharp details and text.

Obviously, the picture is not as crisp as that of higher resolution monitors, but it’s also not as pixely as it’s the case with 27″ 1920×1080 displays.

The Sceptre E248W-19203R has a maximum refresh rate of 75Hz. This provides you with a subtle but noticeable boost in motion clarity in comparison to the standard 60Hz.

In order to take advantage of the higher refresh rate, you’ll also need a suitably high frame rate, which shouldn’t be an issue for most graphics cards as 1080p is not very demanding.

Input lag is imperceptible at ~10ms. So, you won’t be able to notice or feel any delays between your actions and the result on the screen.

Next, the monitor has a GtG (gray to gray) pixel transition time of 8ms. Since it’s only a 75Hz display, most transitions will be able to keep up with the refresh rate, resulting in a smooth gaming experience without prominent trailing behind fast-moving objects.

In darker scenes, you might be able to notice some trailing/ghosting due to slower black to white pixel transitions, but it’s tolerable – or even negligible, depending on how sensitive you are to it. Of course, if you plan on mostly playing fast-paced first-person shooters, you should definitely get a faster display with a TN or IPS panel.

For the best response time performance, make sure the overdrive option in the OSD (On-Screen Display) menu is enabled.

Additionally, the Sceptre E248W-19203R supports Adaptive-Sync with a 48-75Hz range. So, if you have an AMD FreeSync-compatible graphics card, you can synchronize the monitor’s refresh rate to GPU’s frame rate.

As a result, all screen tearing and stuttering will be gone, as long as your frame rate remains within the supported 48-75Hz range. You might be able to extend the range a bit by using CRU (Custom Resolution Utility).

You cannot use Adaptive-Sync/FreeSync with NVIDIA graphics cards on this monitor as there’s no DisplayPort input. The HDMI ports on this monitor don’t support NVIDIA’s ‘G-SYNC Compatible’ technology.

At the rear of the monitor, on the right side, you will find four hotkeys for OSD menu navigation, as well as the power button.

The menu is simple and easy to use with various adjustments available, including the standard brightness, contrast and color temperature controls, as well as some advanced tools, such as gamma, sharpness, and 6-axis hue/saturation.

There are also a few pre-calibrated picture presets: User, Standard, Movie, Eco, FPS and RTS, though we recommend sticking with the User mode and adjusting the brightness to your liking.

The backlight of the monitor is flicker-free and there’s an integrated low-blue light filter (called ‘Blue Light Shift’ in the menu), allowing you to use the screen for extended periods of time without getting eye strain or headaches, assuming you take breaks regularly.

The stand of the monitor is fairly sturdy but only offers tilt adjustment by -5°/15°. Alternatively, you can detach the screen and mount it via the 100x100mm pattern.

Further, the screen has a matte anti-glare coating that prevents reflections.

For gamers, we highly recommend investing in a 144Hz gaming monitor. Make sure you visit our best monitors under $150 buyer’s guide for the best options available.

If you can’t afford a 144Hz monitor or the PC specs required to properly utilize it, consider the ASUS VA24DQ with an IPS panel and a faster response time speed. It also has a DisplayPort input, allowing you to use FreeSync with compatible GeForce cards.

In case you plan on doing some content creation, we again recommend the VA24QD due to its IPS panel with better color accuracy and consistency.

The main asset of the E248W-19203R is its high contrast ratio, so if you watch a lot of videos or play a lot of graphically-oriented games in a dark room, it will suit you better than the IPS variants. However, keep in mind that you can sometimes find the AOC C24G1 on sale for $145 – it’s a 24″ 1080p 144Hz curved VA monitor.

All in all, the Sceptre E248W-19203R is a decent budget monitor, but there are better alternatives available for the money – that is if you can find them at their original non-inflated pricing.