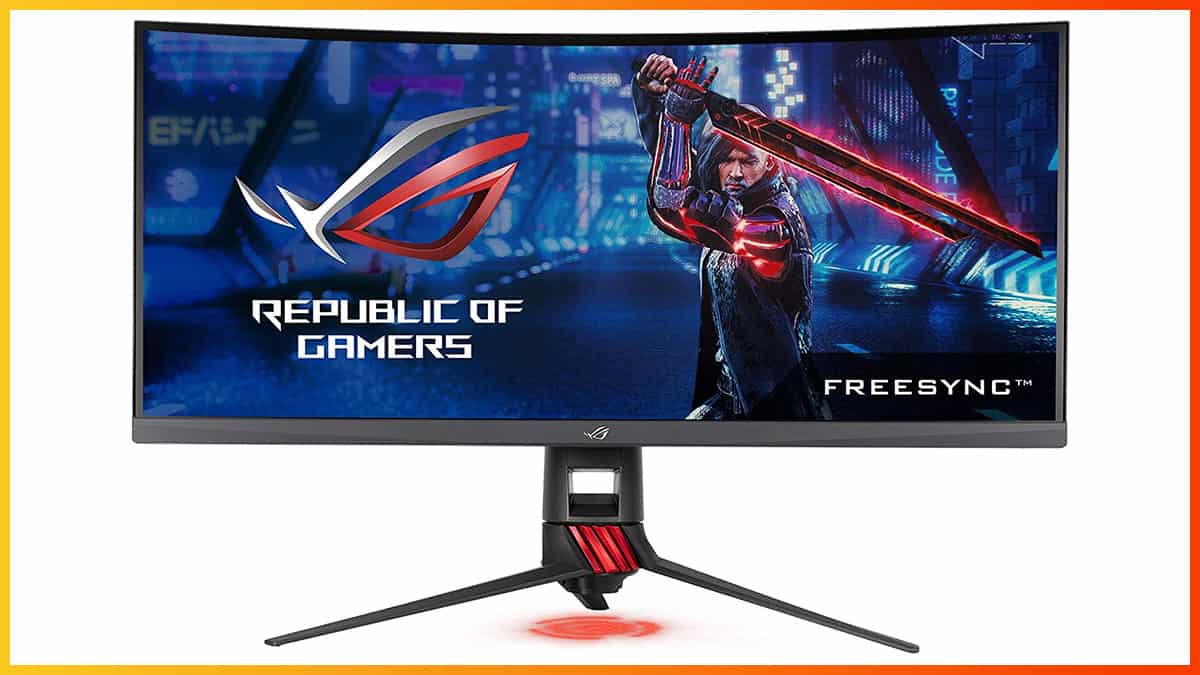 The ASUS ROG Strix XG35VQ delivers an immersive gaming experience thanks to its high refresh rate, high resolution, and striking colors and contrast. It looks gorgeous and has a lot of unique features as well as extensive ergonomics and connectivity. Though it offers backlight strobing, ghosting is still the weakest point of this gaming monitor, but it’s tolerable considering it’s a VA panel. Unfortunately, it’s way overpriced at its current price.

The ASUS ROG Strix XG35VQ offers an immersive picture quality thanks to its 3440×1440 resolution and high contrast ratio, while AMD FreeSync up to 100Hz and Extreme Low Motion Blur ensure smooth performance.

Its price, however, is not as appealing.

The ASUS ROG Strix XG35VQ is based on a VA panel with a 2,500:1 contrast ratio for a superior relation between the brightest and the darkest shades while blacks are deep and vivid.

Straight out of the box, the ASUS XG35VQ 100Hz gaming monitor delivers an outstanding picture quality though the first thing we had to do was lower the brightness as it was too bright.

Not only does the display offer deep blacks, but the colors surpass the specified 100% sRGB color gamut.

However, it’s still not recommended for color-critical work as the colors aren’t consistent, which is why professional designers opt for IPS panels instead. For other types of content creation, it’s great.

The huge 35-inch curved display has a screen resolution of 3440×1440 pixels, which will immerse you into the gaming world with its crisp and vibrant image quality.

With roughly 106 pixels per inch, details are abundant, as well as more than enough screen real estate available without any scaling necessary.

Due to the nature of VA panels, smearing and ghosting of fast-moving objects is noticeable, more so when darker scenes are involved as pixels take longer to shift from such deep black tones.

In the OSD (On-Screen Display) menu, the OD (Overdrive) setting offers six different levels to improve the response time, from 0 to 5.

At 0, ghosting is quite noticeable while at 1,2, and 3, it gets a little better. We recommend setting it to 4 – or to 5 if you’re playing at high frame rates, though then some overshoot (inverse ghosting) may be visible as well.

The color and brightness uniformity is top-notch with excellent greyscale performance and minimal backlight bleeding.

The display doesn’t use PWM (Pulse Width Modulation) to regulate brightness, so there’s no screen flickering.

Lastly, the ASUS XG35VQ input lag performance is outstanding at just below 6ms.

You can enable this feature in the OSD no matter whether you’re using an AMD or NVIDIA card, though it only works at fixed refresh rates, at 85Hz and 100Hz.

Moreover, the image becomes darker as maximum brightness is reduced when this technology is enabled. Note that you can only use it if the monitor is connected via the DisplayPort input and that you won’t be able to adjust the Overdrive settings.

While the Extreme Low Motion Blur does eliminate trailing to some extent, it is still somewhat noticeable, especially if you’re playing fast-paced games with darker scenes.

Therefore, if you mainly intend to play competitive and FPS games, we recommend getting a gaming monitor with a faster response time speed.

For RPGs and other graphically-oriented games, though, the ASUS XG35VQ is absolutely perfect.

If you have a FreeSync-compatible graphics card, you can also make use of the monitor’s variable refresh rate, which synchronizes the refresh rate to your GPU’s frame rate.

By doing so, all screen stuttering and tearing will be eliminated within the dynamic range, which on the ASUS XG35VQ amounts to 48-100Hz over both DisplayPort and HDMI 2.0, including LFC support.

Keep in mind that FreeSync cannot work at the same time as Extreme Low Motion Blur.

When using FreeSync with compatible NVIDIA cards, some users have experienced issues such as the screen going blank when launching a video game. This can be fixed by power cycling the monitor. On the other hand, some users don’t report any problems in this regard.

So, G-SYNC compatibility will vary from unit to unit. Hopefully, NVIDIA will release a driver update to address this.

The OSD consists of numerous exclusive game-enhancing features such as pre-calibrated picture presets (FPS, RTS/RPG, MOBA, Racing, sRGB, User, Scenery, Cinema), as well as Picture In Picture and Picture By Picture, and the ASUS GamePlus features (crosshair overlays, an on-screen timer, and an FPS counter).

Navigation through the menu and features is easy, and quick thanks to the OSD joystick placed at the back of the monitor.

The ASUS XG35VQ monitor also offers the exclusive AuraSync RGB Lighting technology, which allows you to synchronize the LEDs at the back of the monitor with the rest of your AuraSync-compatible gear. It can also project the ROG logo onto the desk, below the monitor’s base.

Application developers can also fiddle with this technology using the AuraSDK software, which can synchronize the RGB lighting with in-game audio.

The ASUS XG35VQ features an attractive design with lots of shining gimmicks and a premium build quality, including an aluminum stand and matte plastics.

The screen of the monitor is covered with a light matte coating, which eliminates reflections without affecting the picture quality. There’s also a cable management bracket at the back of the monitor.

The ASUS ROG Swift XG35VQ price is around $750, which is quite overpriced due to the ROG branding, among other things.

While the ASUS XG35VQ does offer an overall good image quality and smooth performance (except in competitive FPS games), it’s too expensive.