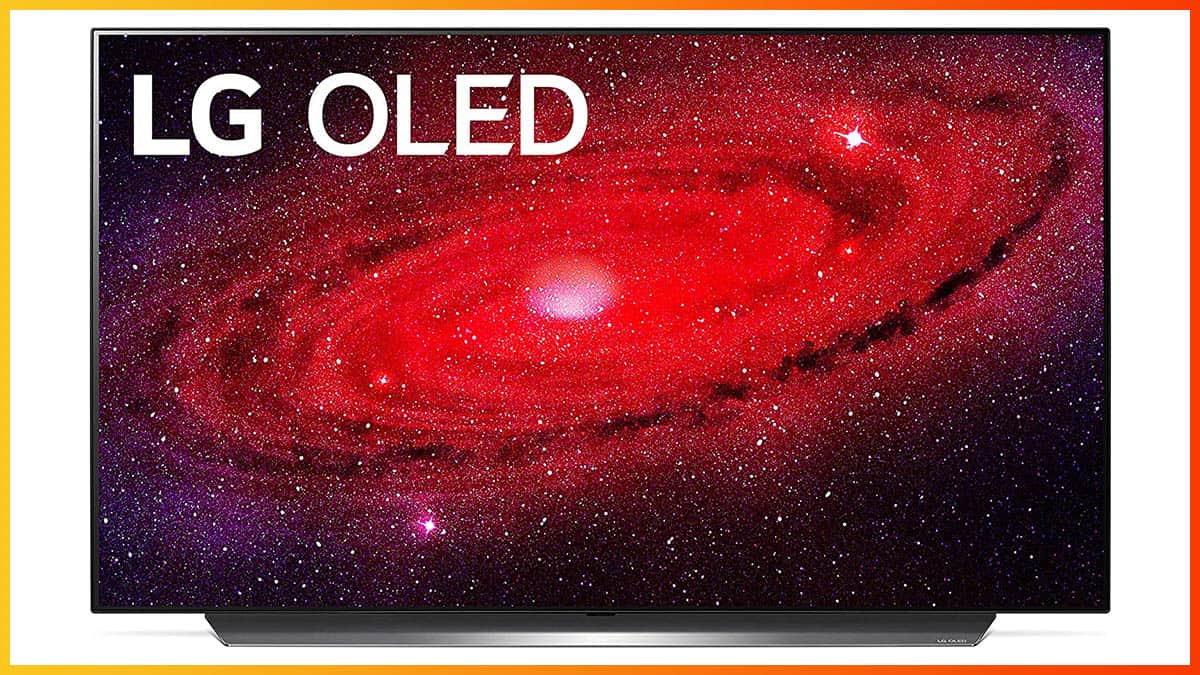 The LG OLED48CX is a 48″ OLED TV that’s also a popular choice for use as a desktop PC display since it offers better image quality and performance than any LED-backlit monitor. However, it has its downsides – mainly the risk of image burn-in/retention and its gigantic 48″ sized screen.

If you want to get the best image quality and the smoothest performance possible at the moment, you’ll need an OLED display.

As there aren’t any viable OLED monitors available, you’ll have to settle for a TV, such as the LG OLED48CX.

In this review, we’ll mostly focus on how the TV performs when used as a PC monitor, but we’ll briefly cover its important TV features as well.

LG’s CX series of OLED TVs is the first series to include a 48″ sized model. Previously, the smallest model available was 55″.

Even though 48″ is still too big for most users when it comes to regular desktop use, it’s much more viable than the 55″ variant.

So, you get a decent amount of screen real estate as well as fairly sharp and crisp details. However, since the TV is a lot bigger, you’ll have to sit a bit further from the screen.

At 37 inches (94cm) away from the screen, your eyes won’t be able to distinguish individual pixels on the screen, but in order to view such a big display comfortably, you’ll need to sit a bit further away. Ideally, you’ll need a rather deep desk or to wall-mount the TV.

Moving on, the main asset of the OLED technology is the infinite contrast ratio as each pixel is self-emissive allowing for deep and inky blacks.

As a result, you get vibrant and vivid colors that will remain perfect regardless of the angle you’re looking at the screen thanks to the wide 178° viewing angles of the OLED technology.

You will also find an sRGB emulation mode in TV settings, which provides a more accurate ~100% sRGB color output for sRGB-native content.

The peak brightness of the TV amounts to ~260-nits, which is sufficient under normal lighting conditions.

Now, there’s a built-in feature called Automatic Brightness Limiter (ABL) that preserves the lifespan of the TV by lowering the brightness when the there’s a lot of bright element on the screen (for instance, pure white background of a browser, scenes with a lot of snow, etc.).

ABL cuts the brightness to ~160-nits when such content is detected, and this jump in brightness is rather noticeable and can be somewhat annoying, but it increases the longevity of the display.

With HDR content, the brightness can reach up to ~800-nits for short periods of time (for instance, scenes with explosions), which makes for an immersive and dynamic HDR viewing experience.

The delay isn’t noticeable, that is, unless you’re used to 240Hz or 360Hz gaming monitors with sub-3ms input lag, in which case the TV will feel a bit slower.

Another big advantage of OLED displays is the instantaneous pixel response time speed. Basically, pixels can instantly change colors which results in no noticeable trailing behind fast-moving objects.

There are four Motion Pro options: Off, Low, Medium, and High – and it can be enabled at either 60Hz or 120Hz.

The higher the setting, the smoother the motion will be, but at a higher cost of picture brightness. At 60Hz, only the ‘High’ option is viable as there’s strobe crosstalk (double-image effect) at Low and Medium settings.

Alternatively, you can use a variable refresh rate (VRR) which makes the TV change its refresh rate according to GPU’s frame rate, thus eliminating screen tearing and stuttering.

You will need a compatible graphics card with HDMI 2.1 by NVIDIA (G-SYNC Compatible), AMD (FreeSync Premium Pro), or a compatible console. The Instant Game Response Time setting needs to be enabled as well.

You can’t use VRR and OLED Motion Pro at the same time.

So, in fast-paced games, OLED Motion Pro will provide you with smoother motion clarity, and if you find screen tearing too bothersome, you can use VRR instead.

Note that there are some gamma shifts when VRR is enabled. Basically, near-black shades get a bit brightened up in some scenes. This is the case with all HDMI 2.1 VRR TVs, and it’s unlikely that it will be fixed via a firmware update.

Update: LG released a firmware update (03.21.16) for the CX OLEDs, which helps alleviate the near-black gamma shifts by adding a ‘Fine Tune Dark Areas’ slider under ‘Additional Picture Settings’. You can adjust it from -30 to 30 in increments of 1; the lower you go, the darker the blacks become at cost of shadow detail clarity, while too high setting makes for too elevated blacks. The best results will vary depending on the game, and while the issue is not completely fixed, you can greatly reduce its intensity.

Overall, thanks to the TV’s low input lag, fast response time, and both VRR and MBR (Motion Blur Reduction) availability, the gaming performance is top-notch as long as you have a powerful enough GPU.

Competitive gamers might prefer lower input lag, but they’ll need a smaller screen anyway as 48″ sized screens require you to move your head/eyes too much.

The main concern most people have with OLEDs is the risk of permanent image burn-in and temporary image retention.

However, as long as you’re careful, burn-in shouldn’t be an issue for a long time. There are many built-in features to prevent it.

This. however, means that you won’t be able to use the TV the same way you’d use a regular LED monitor.

In Windows, for example, you should hide your taskbar, avoid placing icons on the desktop, and set your wallpaper to automatically change. Screensaver is also a must.

You won’t be able to use the TV as a photo-editing monitor due to all the static elements in editing software.

Further, the LG OLED48CX displays use a WBGR sub-pixel layout. For regular PC use, this results in somewhat blurry text unless you use scaling.

Generally, if you plan on using this TV for office-related work, it’s probably not for you. You could use the TV in a dual-display setup with another LED monitor; have your taskbar and icons on the LED monitor, and just use the TV for games and movies/videos.

In games, the static elements won’t be an issue. You can game for hours without worrying, and just play some different content when you’re done with the game so that the pixels can ‘refresh.’

Many games also have the option to hide static elements or the HUD.

Lastly, note that the LG OLED48CX is flicker-free in the sense that it doesn’t use PWM (Pulse-Width Modulation) to regulate brightness, but there are some slight fluctuations in brightness every ~8ms.

In real use, it’s not noticeable and shouldn’t bother those sensitive to flickering.

Another interesting thing you can do is create a custom 3840×1620 21:9 screen resolution in your GPU drivers. This will give you a true ultrawide viewing experience with a wider field of view in compatible games, just with black bars at the top and bottom of the screen.

However, since black is truly black and there’s no backlight bleeding, it won’t be that distracting. This basically turns the TV into a 45″ 3840×1620 ultrawide display with 120Hz, G-SYNC, and HDR!

Unlike LG’s gaming monitors, the TVs don’t have gaming features such as customizable crosshairs, FPS/RTS pre-calibrated picture modes, and Black Stabilization. You also won’t find Picture in Picture or Picture by Picture.

The TV is based on WebOS 5.0, features the Alpha 9 Gen 3 processor, and it comes with the LG Magic Remote.

The design of the TV features metal and high-quality plastics, it’s extremely thin, and VESA mount compatible via the 300x200mm pattern, but the stand is not adjustable.

The screen has a glossy surface with an anti-reflective coating, so the image quality is more vivid, but you have to mind the lighting in your room.

You can also find the 2021 version, the OLED48C1 around the same price (depending on sale, discounts, etc.). The main advantage of the C1 version is the newer WebOS version and a slightly faster processor, but these things won’t affect PC performance.

LG also plans to release 42″ versions for 2022, though the exact release date and pricing is unknown at the moment.

Gigabyte offers a monitor that uses the same OLED panel, the Aorus FO48U. However, it’s more expensive than the CX/C1 yet doesn’t offer any meaningful upgrades.

All in all, if you want the best image quality and incredibly smooth performance, the LG OLED48CX is the perfect display for you as long as you don’t mind its big size and the risk of image burn-in.