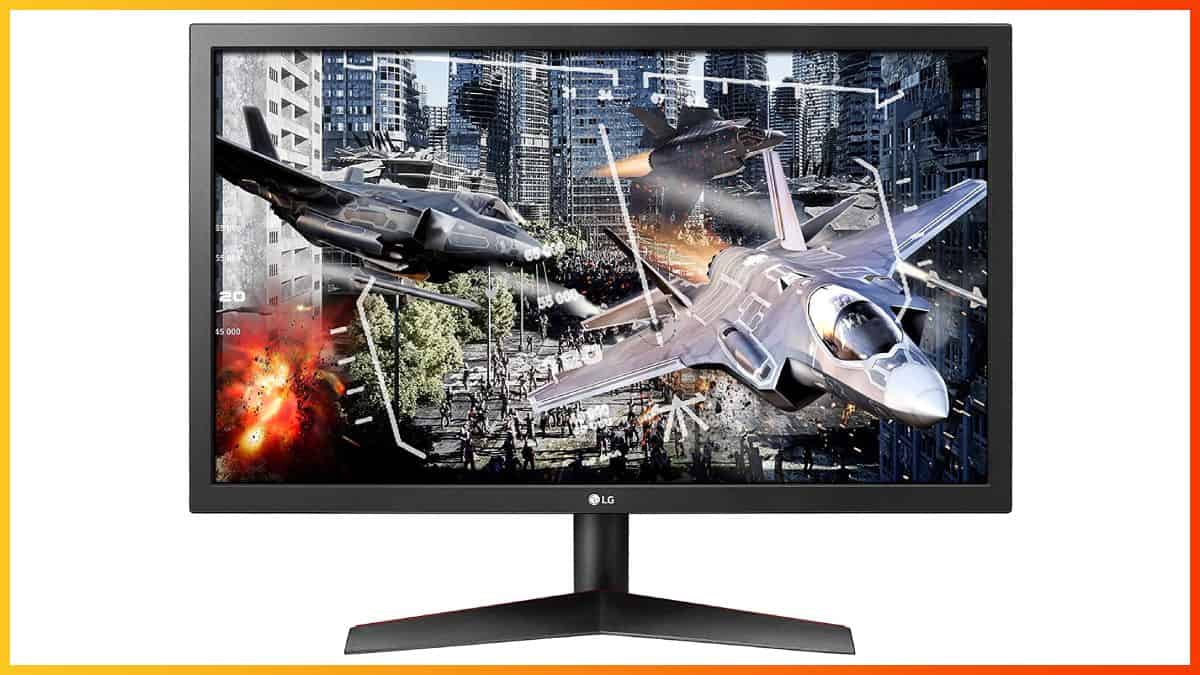 The LG 24GL600F is a budget gaming monitor for competitive gamers looking for both FreeSync and Motion Blur Reduction. In case you’re not a fan of backlight strobing, you may want to check out other alternatives at this price range.

It’s the successor to the popular LG 24GM79G which offers the same key features.

Like all TN panels, you get the narrow 160° (vertically) and 170° (horizontally) viewing angles meaning that the image will shift in color, contrast, and brightness when you look at it from skewed angles.

As long as you are directly in front of the screen, though, there are no issues regarding this.

The colors are not as rich as that of IPS and VA panel displays, but you get a fast 1ms response time speed for zero ghosting in fast-paced games.

1080p resolution provides a decent pixel density on a 24″ screen and, more importantly, allows for smooth gameplay as it’s not very demanding on your GPU/CPU.

Our LG 24GL600F-B unit had no dead/stuck pixels nor any other defects, such as excessive backlight bleeding. The image out of the box can be improved via calibration, though.

The monitor has a flicker-free backlight and a low-blue light filter, so you can game for hours to an end without eye strain/fatigue.

The LG 24GL600F input lag performance is top-notch with only ~4ms of delay at 144Hz, which is fit for professional gaming.

If you play fast-paced games such as first-person shooters or racing titles, a 144Hz refresh rate is a must as it makes everything run significantly smoother.

Moving on, the response time speed of 1ms (GtG) removes all trailing and motion blur of fast-moving objects. You can also use the 1ms Motion Blur Reduction (MBR) technology, which via backlight strobing provides CRT-like motion clarity.

This technology, however, introduces flicker, lowers maximum brightness while activated, and can only work at 120Hz or 144Hz.

FreeSync removes all screen tearing and stuttering as long as your FPS (Frames Per Second) is within the VRR range of 48-144Hz.

In case your FPS drops below 48Hz/FPS, AMD LFC (Low Framerate Compensation) kicks in and improves the performance by doubling or tripling the frame rate (for instance – at 40FPS, LFC ups the refresh rate to 80Hz).

On the LG UltraGear 24GL600F, AMD FreeSync also works with compatible NVIDIA cards without any issues whatsoever. Note that you cannot use FreeSync and 1ms MBR at the same time on this monitor.

At the same time, the navigation is effortless thanks to the joystick that’s placed beneath the bottom bezel of the screen.

We recommend using the Fast overdrive option as ‘Faster’ introduces a lot of pixel overshoot.

Connectivity options include DisplayPort 1.2, two HDMI 2.0 ports, and a headphone jack whereas the LG 24GM79G also has two additional USB ports. AMD FreeSync is supported over both DP and HDMI with a 48-144Hz VRR range.

The LG 24GL600F price ranges around $180 – $230, which is too expensive considering that you can get the LG 24GN650 at the same price; it’s just as fast, but uses an IPS panel with better colors and wider viewing angles.

The 24GL600F is also available with a fully ergonomic stand as the LG 24GL650F for a bit higher price.

Overall, the LG 24GL600F is a decent gaming monitor, but there are better options available at this price range.