The AOPEN 27ML1U is an outstanding monitor for the price. It’s great for gaming, office use, and everything in-between. If you don’t care for 144Hz and competitive shooters, it’s the best monitor under $250.

The AOPEN 27ML1U is an affordable 27″ 1440p IPS display which provides an exceptional image quality for the price. It offers vibrant colors, wide viewing angles, clear details, and plenty of screen space.

Plus, it has a motion blur reduction technology, AMD FreeSync up to 75Hz, and a quick response time speed which make it a great monitor for gaming.

Although you may not have heard of AOPEN, they actually used to be a sub-Acer company. You will find many similarities to Acer’s monitors such as the same naming scheme (AOPEN 27ML1U bmiipx), OSD/user manual layout, “ZeroFrame” design, etc.

In other words, it’s not an off-brand company that uses second-grade panels, and the AOPEN 27ML1U is the proof of that.

The AOPEN 27ML1U monitor is based on an IPS panel with 10-bit color depth (8-bit + 2-bit FRC) and 100% sRGB color gamut. You get accurate, consistent, and vibrant colors.

IPS panels also offer wide 178-degree viewing angles which ensure that the picture won’t shift in color when you look at the screen from different angles.

On the 27″ screen of the AOPEN 27ML1U, 1440p resolution provides the ideal pixel-per-inch ratio which means that you get plenty of screen space and sharp details without scaling necessary.

Moving on, we didn’t detect any defects such as dead/stuck pixels or excessive IPS glow/backlight bleeding on our unit.

The monitor has a flicker-free backlight and a low-blue light filter which prevent eye fatigue and headaches caused by looking at the screen for extended periods of time. 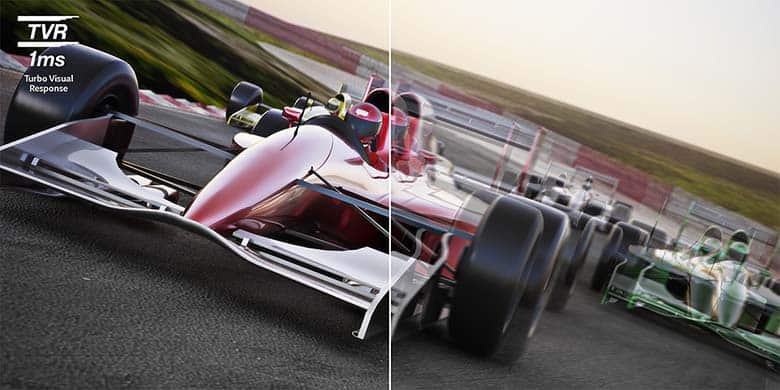 A 75Hz refresh rate provides a small boost in motion clarity and gameplay fluidity, but don’t expect a big improvement over the standard 60Hz displays. For fast-paced and competitive games, we recommend getting a 1080p 144Hz monitor instead.

However, if you mostly play the latest AAA titles and more graphically-oriented games (or games that are locked to 60FPS), the AOPEN 27ML1U 1440p gaming monitor is a better option for you.

The AOPEN 27ML1U input lag is only ~10ms which makes for imperceptible delay between your actions and the result on the screen.

Further, the response time speed is around 4ms which is enough to eliminate all prominent trailing of fast-moving objects.

For CRT-like motion clarity, you can enable the TVR (Turbo Visual Response) feature which via backlight strobing reduces the perceived ghosting and motion blur.

Backlight strobing also decreases the monitor’s maximum brightness while active, so use it only in fast-paced games if you prefer it; otherwise, make sure it’s disabled. 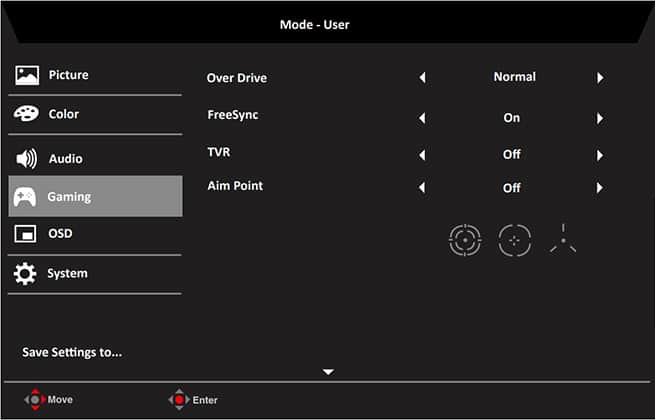 The AOPEN 27ML1U 27″ 1440p IPS gaming monitor supports AMD FreeSync. If you have a FreeSync-compatible graphics card by AMD or NVIDIA, FreeSync will provide you with a variable refresh rate (VRR) which eliminates screen tearing and stuttering without affecting input lag. FreeSync works without issues with compatible NVIDIA cards.

The VRR range of the AOPEN 27ML1U is only 48-75Hz/FPS, so LFC (Low Framerate Compensation) is not supported meaning that under 48FPS, VRR won’t work. Using CRU, you should be able to increase the VRR range to ~40-75Hz and maybe even further depending on your particular unit of the display.

Note that you cannot use FreeSync and TVR simultaneously. 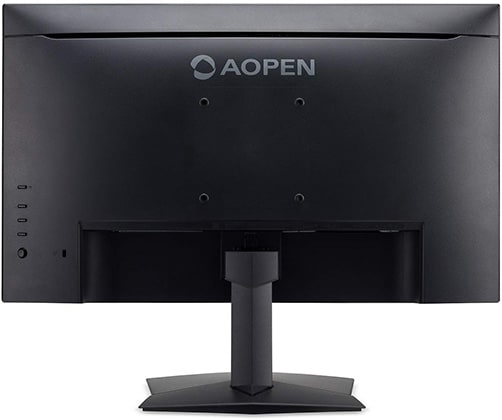 As far as the ergonomics are concerned, you can only tilt the screen by -5°/15°. Luckily, the stand is easily detachable allowing you to effortlessly mount the screen on a third-party stand via the 100x100mm VESA pattern.

Connectivity options include two HDMI 2.0 ports, DisplayPort 1.2, a headphones jack, and an audio line-in for the 2x2W integrated speakers. FreeSync works over both HDMI and DP, so you can use it with Xbox One consoles as well.

The monitor has the common ZeroFrame design that’s found on modern Acer displays; The bezels are very thin which make it perfect for multi-monitor setups, but there’s also a narrow black border around the screen which is standard for these ‘bezel-less’ monitors.

The AOPEN 27ML1U price goes for around $230-$250 which is well worth the price considering that there aren’t many 27″ 1440p IPS monitors with FreeSync available.

However, at this price range, you can get a 1440p 144Hz gaming monitor with a curved VA panel, the AOC CQ27G1. It doesn’t have as accurate colors, but it has a higher contrast ratio and deeper blacks.

So, if you don’t need accurate colors and your FPS rate is usually around 100FPS in games, you should go with the AOC CQ27G1 instead.

Until now, there weren’t any 27″ 1440p non-144Hz IPS models available that were tuned for gamers. So, AOPEN finally gave us a choice of an excellent yet affordable 1440p gaming monitor.