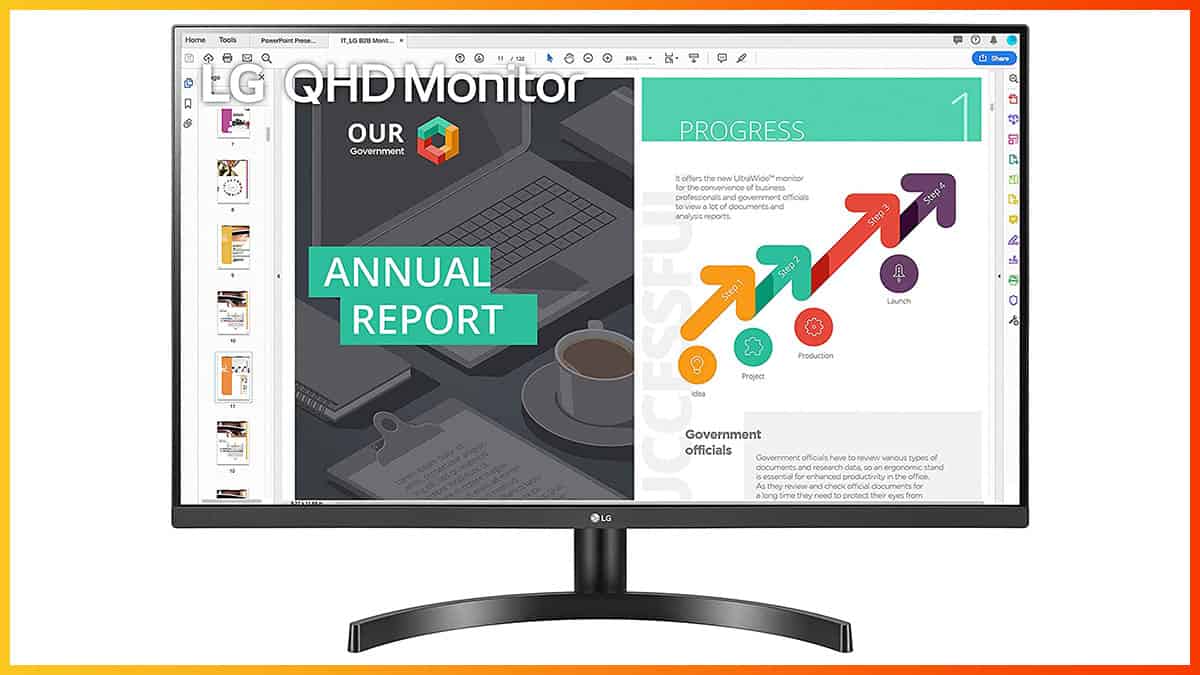 The LG 32QN600 is one of the cheapest 32″ monitors you can get with a decent screen resolution. Moreover, it has an IPS panel with consistent colors, wide viewing angles and FreeSync up to 75Hz.

If you’re looking for an affordable 32″ monitor with a decent resolution for its screen size, the LG 32QN600-B might be just for you.

When displayed on the monitor’s 32″ viewable screen, the 2560×1440 Quad HD resolution results in a respectable pixel density of 91.79 PPI (pixels per inch).

This means you’ll get a decent amount of screen real estate and fairly sharp details and text. A 24″ 1080p monitor has a similar pixel density, so you get basically the same viewing experience, just on a larger screen.

In comparison, the 1920×1080 Full HD resolution on 32″ sized screens has a pixel density of 68.84 pixels, which results in a pixelated picture with smudgy details and very little screen space.

So, if you want a budget 32″ monitor, we highly recommend going with the 1440p version as 1080p looks rather awful at this screen size; the price difference is also not that big.

However, if you plan on gaming, make sure your CPU/GPU will be able to handle the QHD resolution, as it’s notably more demanding than Full HD. For office and everyday use, you don’t need an expensive PC rig.

In case you’ll be mostly using the LG 32QN600 monitor for gaming, we recommend getting a display with a higher refresh rate instead – we’ll include a few models below.

Moving on, the monitor has an IPS panel with full sRGB gamut coverage for vivid and consistent colors. Further, thanks to the 178° wide viewing angles, the image won’t shift in color, brightness or contrast when viewed at skewed angles.

If you want a display with more saturated colors, there are monitors with wider gamuts at this price range – though not in the 32″ 1440p IPS form factor.

The LG 32QN600 is factory calibrated at Delta E < 5, which is fine for gaming and everyday use. For professional color-critical work, you will need a colorimeter to improve its accuracy, but for basic content creation, it will do just fine.

Next, the monitor has a peak brightness of 350-nits, so it can get more than bright enough under normal lighting conditions, while its contrast ratio amounts to 1,000:1, which is standard for IPS monitors. Some IPS glow is also present, but its intensity varies across different units.

The LG 32QN600 has low input lag of around 9ms, meaning that you won’t be able to feel or notice any delays between your actions and the result on the screen.

There are four response time overdrive modes: Off, Normal, Fast and Faster.

We recommend using the Fast mode for the least amount of visible trailing behind fast-moving objects without overshoot.

The monitor has a maximum refresh rate of 75Hz, which offers a small but noticeable boost in motion clarity in comparison to 60Hz.

Variable refresh rate (VRR) is supported with a 48-75Hz range via AMD FreeSync over DisplayPort and HDMI. You can also use VRR with compatible NVIDIA GPUs (10-series or newer) over DisplayPort.

You might want to try using CRU (Custom Resolution Utility) to increase the range.

The monitor’s backlight is flicker-free and there’s an integrated low-blue light filter (the ‘Reader’ mode).

Beneath the bottom bezel of the screen, there’s a directional joystick for quick and easy navigation through the OSD (On-Screen Display) menu. Alternatively, you can use LG’s On-Screen Control desktop application for most adjustments.

Noteworthy features include Black Stabilizer (improves visibility in dark scenes), various picture presets and Dual Controller (allows you to connect two PCs on the same network to the monitor and control them via one set of keyboard and mouse).

The monitor also supports HDR (High Dynamic Range), however, since it lacks the display hardware required for proper HDR image quality, you should disable it.

The stand of the monitor is tilt-only, but the screen is VESA mount compatible via the 100x100mm pattern. Further, the screen has a matte anti-glare coating that prevents reflections without adding too much graininess to the image.

However, keep in mind that you can sometimes find a 32″ 1440p 144Hz monitor with a VA panel and wide color gamut for ~$250 on sale, such as the Gigabyte G32QCA, which is a much better option for gaming.

All in all, the LG 32QN600 is one of the best 32″ monitors you can get for the price (~$210) when it comes to everyday use. For gaming, there are better options with higher refresh rates around this price range.